Feeling the sand in our ears 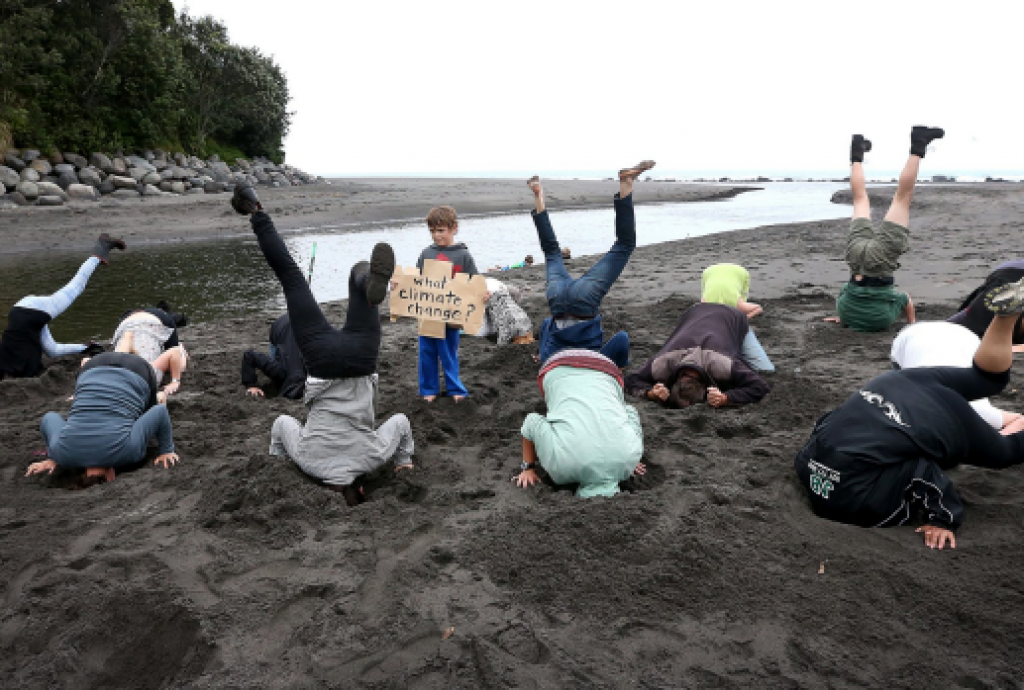 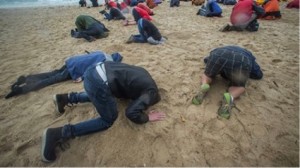 Of all the many forms of protest over the years, this head-in-the-sand action is the one that has given me the biggest smile for some time. In beaches and in sandpiles across the world in 2014 protestors have been burying their heads to draw attention to the inaction of world leaders on climate change and the outright denial by many about the existence and extent of the problem.

It is a graphic demonstration of what we do not see and it also prompts me to wonder what I am not seeing on these and many other issues or what I am also choosing not to see. In particular, I have been thinking about a question I fear I have been ignoring for some time.

Two broad clusters of issues have shaped my thinking and acting in the past forty years: environmental issues (and in recent years especially the issues of human-induced climate change) and poverty, inequality, and related injustices. I have worked to change the world to make things fairer among people and to limit our burgeoning impacts on the rest of the planet.

These issues have come together at times, most particularly with Oxfam’s work highlighting the impacts of climate change on the poor. But they also banged together for me, with a mighty thump, when I read Thomas Piketty’s magisterial Capital in the Twenty-First Century. It really is a remarkably good read, beautifully written and translated, for a book on economics. And while I knew the title was an allusion to Karl Marx there was a special jolt of recognition to see it in the German edition in a bookshop window in Vienna. 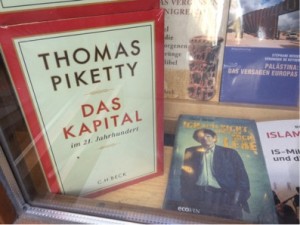 The overall power of Piketty is his use of long-run datasets to show how consistently capital has accumulated with the rich and the very rich and kept accumulating and how this is a structural feature of capitalism. This trend was dramatically disrupted in the middle of the 20th century but in recent decades the developed world has now been returning to the dramatic levels of inequality of a century ago. The disruption in last century was occasioned by the dislocations of two world wars and a great depression and then reinforced by Keynesian policies of public investment and redistribution and an oil-fuelled economic recovery.

The jolt I got from Piketty, the one that lead me to shake some of the sand from my ears, is the way his data shows that shifts toward greater equality have been enabled by periods of substantial economic growth. What does that mean for a world facing the disruptions of climate change? We already face the question as to whether society is capable of grappling with an issue such as climate change which is more global and longer-term in its dynamics than any issue societies have successfully grappled with in the past. Secondly, it is still moot whether societies can grapple well with issues of growing inequality that have proved so structural and resistant to change. Progress has been made on this but then dramatically unpicked in the years of neo-liberalism from the late 1970s onwards. That struggle continues.

The question that arose (and not one I have seen picked up a lot in other writing about Piketty) is how can the world struggle with both these issues when to a degree they pull against each oter? We know from the past century that where societies have economic growth and the struggles for fairer distribution of income and wealth are successful then inequalities can be redressed to a degree. But can we fight for redistribution at the same time as we decarbonise our economies and, to a degree, constrain the shorter-term possibilities for economic growth? How do we manage both these needs.

After reading Piketty I was left feeling the community and leadership stakes had risen even higher than I had thought. As if in a high diving competition, the degree of difficulty had leapt from 3.2 to 4.8. The need for creative and committed leadership, sustained over the long haul, has never been greater.   There is not just a need to get others to pull their heads out of the sand but for each of us to wonder about the warm dark places we burrow into.