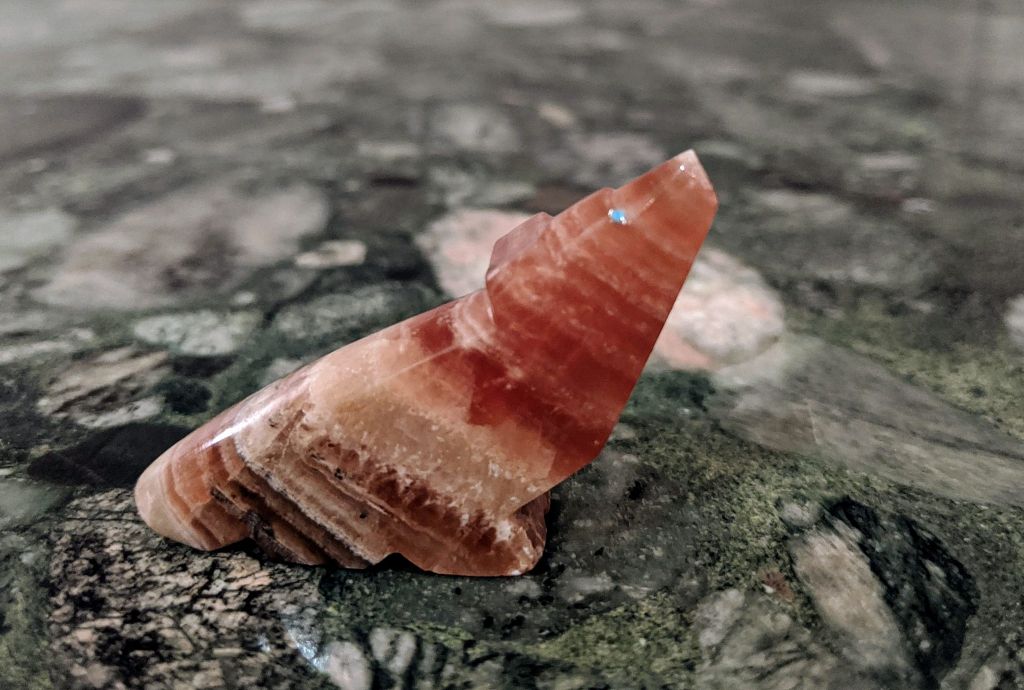 While catching up recently with two of my wonderful colleagues at Cultivating Leadership, one of them asked the other what kinds of new connections she was making since having chosen her fetish. Wow, I thought, what a juicy conversation this was going to be!  Yet quickly I was told that this wasn’t about the kind of fetish I was probably assuming. My friend said she would let me in on a secret, and a few minutes later produced a tray of beautifully carved stone figures in a variety of natural colors. She introduced them as fetishes, and invited me to choose the one that appealed the most to me. Without pondering it too long and hard, I selected the one that clearly stood out to me.  It had beautiful reddish brown and earthy tones. I lifted it up from the tray. It felt cool and smooth in my hands, almost like a calming presence. When I looked at its shape more closely, I exclaimed “oh, I didn’t realize it was a coyote. I hate coyotes!”. Nonetheless, something about the small figurine was captivating and had me in awe. To be clear, I don’t really hate coyotes. They sometimes roam the area where I live. In searching for food, they have a bad rap for snatching small pets from our neighborhood. I have a beloved cat that likes to be outdoors — hence my anti coyote attitude. Which now was about to change.

One early morning last year, while out jogging I literally ran into a coyote. I recall the animal looking at me with what I perceived as a mix of unease and curiosity. Maybe a projection of my own state — who knows? I stood very still and silent, and took it all in. Many people tend to label coyotes as mangy and nasty creatures. This one looked perfectly healthy, however — strong, and beautiful. It was one of those “time appearing to stand still” moments. I still remember what I was thinking – that animals sometimes can pick up on the vibes you are giving off.  In this case the vibe I was trying to conjure up was something like “you look beautiful, and I get it that you’re hungry, but please stay away from my kitty”. In reality the vibe I probably was sending out was “yikes, this is a bit scary, should I run or chase you away?”. I suppose the coyote didn’t care much. We both stayed calm. Eventually, the coyote turned around and trotted off into the distance. And I continued my morning jog.

But back to the fetish. What my friend shared with me was an assortment of Zuni carvings called fetishes. Each has a specific meaning. I learned that the coyote is the Hunter God of the West (outdoor kitty beware!). It represents laughter, humor and the ability to learn from one’s own foolishness. It is supposed to be a master trickster and characterized by arrogance and a sense of self-importance. It can teach us how our impulsive choices and self-centeredness fail us. Or, in the words of my friend, a reminder to embrace our shadow side.

So that afternoon, after I was gifted the coyote fetish and parted ways with my friends, I was wondering how to make sense of it all. There is plenty to learn from ancient wisdom, and I believe that cultures living in close connection with nature have a lot to teach us.  I had to smile at the fact that I picked up the carving without realizing it was a coyote. The trickster. QED. I have definitely learned a lot from my own foolishness over the years, and I like to think that I love laughter and have a sense of humor. The notion of arrogance and self-importance was much harder to embrace. Nevertheless it resonated with me. Such a great reminder of my intention to live a life of service. The impulsiveness of acting out of self-centeredness may feel right in the moment, yet it can leave a bitter taste pretty quickly. Dedication to a bigger cause, or acting from my creative (vs reactive) self, feels a lot more fulfilling. Thank you trickster coyote for reminding me of that.

A few days later, as I was looking at the carving again, I started searching online for potential other meanings of the coyote fetish: Yes, the coyote is the symbol of the trickster. Life, however, is the real trickster. The coyote understands this. By accepting situations as they are and dealing with the unexpected willingly and eagerly, the coyote survives. Coyotes show us that life is unpredictable and uncontrollable and that unexpected occurrences can be viewed as opportunities, not misfortunes. The coyote’s wisdom teaches us to live in the moment and wonder at it all.

Wow! Just like the coyote I had encountered in real life. I could never have predicted when I would run into a wild animal in my neighborhood. A coyote is something most people probably want to avoid — mangy, nasty, predator, scavenger.  Yet in the moment, while feeling surprised and somewhat uneasy, I could clearly see its beauty and its place in our suburban ecosystem (after all, we’ve encroached too much on its natural habitat). While startled when we both saw each other first, there was no drama, and no complicated mitigating strategy needed. We both stayed (fairly) calm, sussed out the situation, ran off in different directions, and that was it. Sometimes it can be very liberating not to know what’s coming, and trusting that we can deal with it in the moment. But it’s not something we’re wired to do. As one of my friends says, we are all descendants of nervous monkeys; the chilled out primates didn’t survive. It’s not surprising then that it’s hard for us to see unexpected occurrences as opportunities.

No doubt that careful planning and strategizing is important for situations that can be predicted and controlled. Yet embracing the unexpected and co-creating with what’s present and right in front of us, is something we can all practice and learn. It frees up a lot of energy and allows us to be more vital in work, play, and anywhere in between. Thank you again, trickster coyote, for the timely reminder!

One thought on “Trickster Coyote”