Celebrating Doug from the Mountain Top 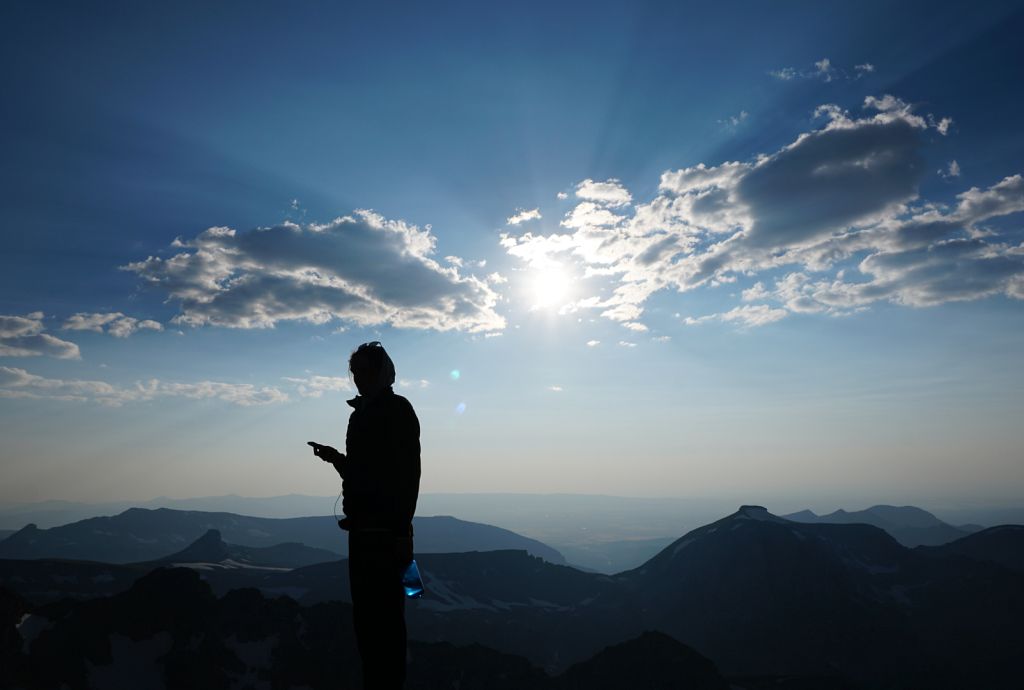 This morning I awoke at 3am at the Lower Saddle of the Grand Teton, a mountain in Wyoming that I grew up looking at every day of my early life, but which I had previously seen only from the bottom looking up.  I, along with 11 other people, including two of my three children, were about to attempt the last 2000 feet to the summit after having ascended 5000 feet from the valley floor yesterday. We woke, we climbed, and we trusted our bodies, our guides, and each other.  We breathed and faced into our fears. Each of us was in some way the biggest version of ourself today.

Now, 17 hours later, we are back at 6000 feet above sea level, in a comfortable house in our comfortable beds, having reached the summit at 7am. My heart is full and my body hurts.  My body is full and my heart hurts. I’m grateful for the healthy body that got me to the top of that peak, which from the valley floor looks impossibly high and insurmountable. I’m grateful for my hurting heart that, from that mountain top, felt just a little bit closer to my friend, Doug, who loved the mountains as much as I do.

Tomorrow afternoon on the other side of the country, hundreds of people will gather at the Bend of Ivy Retreat Center near Asheville, North Carolina, to celebrate Doug’s life.  Like me, every one of them will have had their lives touched by Doug in some way.  My guess is that, also like mine, their hearts will be both full and hurting.  And those who were lucky enough to have been Doug’s students will be just a little more present to their bodies and to the present moment of their experience, than they would otherwise have been.

Doug was a brilliant coach. He was mine for a couple of years during a particularly important personal and professional transition for me.

He was a gifted teacher. Anyone who has ever attended one of his workshops knows this.

He was a curious learner. For a guy who had so much knowledge and experience to offer others, he was always hungry to learn about what I and others could teach him.

He was an amazing collaborator. Over a period of two years, we had regular phone calls in which we “geeked out” on theory, challenged each other to come back to earth and focus on what would actually be useful for our clients, and put together ideas and designs that were so much greater than the sum of their parts.

Doug was all of these things.  During the years I knew him, the nature and quality of my work changed, in large part because of the things I learned from him, the things he wanted to learn from me, and the new things we created together.

But these things pale in comparison to what I experienced as Doug’s true super power—the way his presence somehow and consistently enabled me to be the biggest version of myself. When he was my coach, he saw things in me that I sometimes couldn’t see in myself.  Later, when we became collaborators and friends, this continued. We laughed, we challenged each other, we disagreed, we sometimes addressed tough issues in our working relationship. And always, his presence made me bigger.

In 2016, when we were designing and preparing to run the retreat that would become part of the unfolding of his last book, Presence-Based Leadership, we had a conversation I’ll never forget.  Doug had just returned from a backpacking trip with his two brothers, a thing he had been looking so forward to. He told me he was disappointed because he, in his words, “didn’t have the chops” to get to the top of a mountain they had planned to climb. He was feeling not only new physical limitations but also his own mortality. We talked a lot about his wanting to slow down, to travel with Walker and his dogs in their new Air Stream, to transfer most of the day to day running of his business to his partner, Bebe. But it would be another year before he learned that it hadn’t been just the benign aging process that kept him from his mountain top on that day.  While his body was growing cancer, he continued to grow himself and help others to grow into bigger versions of themselves. Even as his body was quietly beginning the dying process, Doug lived fully, and he helped me and countless others to do the same.

This morning, as I climbed that mountain, I took Doug with me.  When I was nervous, I grounded, centered, and trusted.  When I reached the top and was exhilarated, I breathed in the fullness of my joy in that moment. From the summit, I said my goodbyes to Doug.  He was there with me. He may not have had the chops to summit his mountain two years ago, but he was with me on my ascent today.  My body hurts, and there is a hole in my heart.  But thanks in part to Doug, my heart has grown more than big enough to have a hole the size of him and still be full.

5 thoughts on “Celebrating Doug from the Mountain Top”