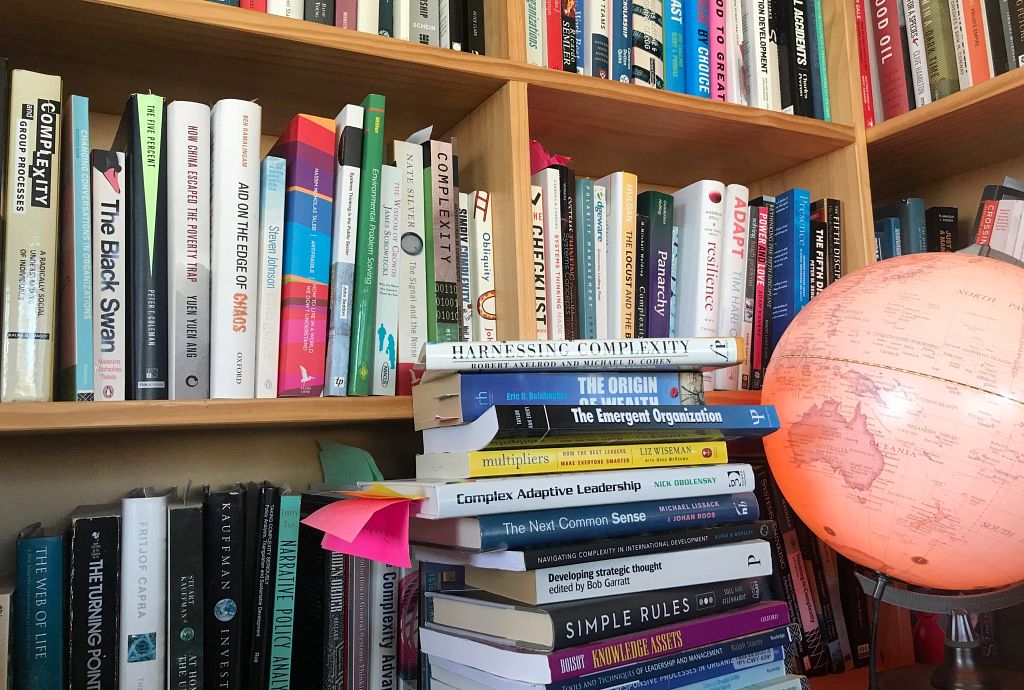 There are clients who ask if we can teach the main ideas of adult development or complexity theories in an hour.  There are sometimes participants in our leadership programs who complain that we could have gone much faster.

They are both right in a way.  These ideas can be effectively communicated quickly and succinctly.  And they can also fruitfully take time.  They repay revisiting and rumination, often over many years.  These are theories that grow on us.  Or we grow into them as we live and practice them.

I was reminded of all of this when I was reading Yuen Yuen Ang’s wonderful book “How China Escaped the Poverty Trap.”

Yuen Yuen Ang based her analysis of Chinese economic development on an adaptation framework developed by two other University of Michigan professors and complexity pioneers: Robert Axelrod and Michael Cohen.  I have written about Ang’s book here and the Axelrod and Cohen framework here.

When I first came across Ang’s citing of Axelrod and Cohen’s 1999 book “Harnessing Complexity: Organizational implications of a scientific frontier” a bell chimed faintly. “Do I have a copy?” I wondered.  It was on the shelf roughly where I expected it to be.  And, unlike many of the books on my shelves that I have yet to get to, this one turned out to be well marked up from the first time I had read it.

Sometimes it seems it just takes time before ideas really land.  I say that with a blush, of course.  But this is not the first time it has taken me a while to get ‘it’, or to get a different ‘it’ after time has gone by.  At the turn of this century I completed a Masters program focused on the application of chaos and complexity theories in the social sciences.  Concepts I studied then were influential in shaping my thinking.  They took me on to a PhD.  But, when it came to applying them to organisations, I tended to think of them more as mind-altering metaphors than concepts I was able to apply practically or use on a day-to-day basis.

Some complexity pennies really did not tumble for me until I was trying to teach some of the ideas almost a decade later.  I think I first saw the Cynefin framework as a categorisation tool rather than also seeing its explanatory insights as an approach to sensemaking.  I assume I passed by Axelrod and Cohen because I was uncertain what I could do with it.  Now, having spent a few years teaching leaders ways to experiment more, I am excited to explore ways to use their adaptation framework to bolster this effort.

I canvased another example of concepts that made sense differently over time in the introduction to my doctoral thesis I wrote nine years ago.  There, I reflected on a searing personal experience aspects of which I had rethought repeatedly in subsequent years.  In 1995, at Cave Creek, on the West Coast of New Zealand, a viewing platform collapsed, plummeting 30 metres and tossing 18 people into an abyss.  Fourteen of them died.  The four others were injured.  I was a leader in the Department that managed the park and had built the platform and I was put in charge of handling the issue and all its ramifications for the Department, overseeing our own investigations, our responses to a number of formal inquiries and, over time, reviewing and changing systems, and then fully restructuring the department.  The failures were clearly within the Department and were found by the Commission of Inquiry to be “systemic”.

As I worked through these challenges and then reflected on them subsequently, many ideas changed for me.  I wrote about one of them, the verdict of ‘systemic failure’ and how my understanding of this concept evolved over the years.

“My initial response was to understand the cause of the tragedy as systemic in the sense that there were multiple errors, and omissions and failures that combined to result in the tragedy, there were few systems to check the incidence of these specific failings, and there was no one person or persons or things to whom fault might be clearly be ascribed.  This was essentially a cause-and-effect explanation and there was a web of inadvertent causes, errors, and omissions combining to such tragic effect.

“As I worked on driving many of the far-reaching changes subsequently made to the Department, I came to understand systemic success and failure in a more active and conscious way: that the responsibility of leadership was to design systems, strategies and organisational structures to enable the organisation to function as a responsive and constructive body, shaping the world around it and responding to its situation.  It was not that all risks could be controlled by all-knowing leaders, or procedures could be described for every contingency, but that leaders were charged with creating the conditions for organisations to develop, and self-organise, to work for the desired ends.  The leaders were responsible for the whole system.

“A third phase occurred later as I worked in the re-formed Department and also took the time to further explore theories of systems thinking and complexity.  I came to understand more that the nature of systems successes and failures are also constructed in the ways people make sense of the world they lived and worked within.  Unless people hold a picture of the systems they are operating within then they are less likely to see the likely consequences of their actions or take some responsibility for them.  Adult development researchers, I discovered, had much to say that was relevant to the ways people’s ways of making sense of their worlds evolved over time.

“I should also note here that these three different ways of understanding systemic failures and successes were not each a replacement for the one that had gone before.  New insights added to the earlier ones.  Attention needs to still be paid to causes and effects; it helps to see these in a larger organisational picture; and both these perspectives are enriched by an understanding of the different ways people might make sense of what is happening.”

I felt a bit shame-faced when I picked up Axelrod and Cohen’s book and realised I had read it a decade earlier.  But I doubt this is just forgetfulness on my part.  I suspect there is something like an adult development shift involved in some of these examples.  I had to develop greater breadth of sensemaking to be able to hold the ideas more fully.

You might take a moment to think of an idea or value that has been important to you for many years: such as openness, trust, accountability, complexity, curiosity….  Do you hold that value or idea differently now than in previous decades?  If you think back 15, 20, or perhaps 25 years, can you see how this old friend may have changed over time?  How much does that change seem to be a result of the idea changing or of you experiencing life and the idea differently or of making sense of the world differently?