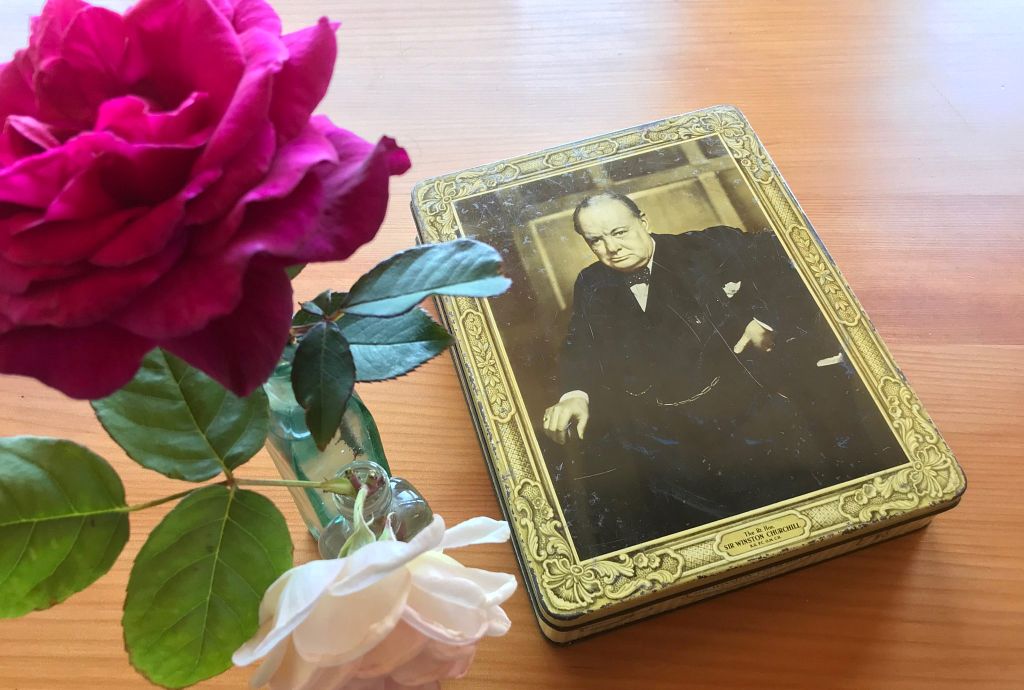 We own a treasured biscuit tin with the famous Karsh portrait of Winston Churchill.  I grew up with the image of Britain, gritty, isolated, battling on through the Blitz against the might of Germany.  “Very well, alone,” was the caption on a David Low cartoon after Paris fell in June 1940.

Yousuf Karsh’s portrait of Churchill, taken after he spoke to the Canadian Parliament at the end of December 1941, symbolised this pluck and defiance.  As Karsh tells it, Churchill, his cigar freshly lit, granted him a single picture.  “Churchill’s cigar was ever present. I held out an ashtray, but he would not dispose of it. I went back to my camera and made sure that everything was all right technically. I waited; he continued to chomp vigorously at his cigar. I waited. Then I stepped toward him and, without premeditation, but ever so respectfully, I said, ‘Forgive me, sir,’ and plucked the cigar out of his mouth. By the time I got back to my camera, he looked so belligerent he could have devoured me. It was at that instant that I took the photograph.”

We teach that complex systems are not predictable but they do follow patterns.  Winston Churchill provides some examples.

I was stunned, some years ago, to read in Roy Jenkins “Churchill: A Biography” of how precarious the situation was when Churchill came to power in May 1940.  The French defences were collapsing.  British and French troops were yet to be evacuated from Dunkirk.  German was planning, as a last resort, Operation Sea Lion, an amphibious invasion of Britain.  Hitler was hoping for a negotiated peace.  Churchill’s Conservative colleagues Chamberlain and Halifax tended to see negotiations as a distasteful necessity.  Over a critical weekend in late May, Churchill relied on Labour Party leaders Attlee and Greenwood to maintain a 3-2 majority within his new War Cabinet.[1]

In retrospect, I had seen Britain as resolute.  As staunch as the leader on the biscuit tin lid.  But at the time the British Government wavered.  At the time it was not predictable as to what the outcome would be.

It had been even less predictable a couple of weeks before when Chamberlain had resigned.  Would he go? When would he go?  Who would replace him?  All these were unknowns and the answer was rarely “Churchill”.   So few of his Conservative colleagues trusted him and Labour MPs would not work with him.  Nicholas Shakespeare writes about this in his new book “Six Minutes in May: How Churchill Unexpectedly Became Prime Minister.”

Churchill had just made a mess of his leadership of the chaotic Norway campaign, everybody else was being blamed, and Neville Chamberlain eventually paid the price as Prime Minister, but Shakespeare argues that even the Parliamentary speeches that undermined the PM were unpredictable.

In May 1940 it was not predictable with any confidence that Churchill would become PM or that he would rally his government to fight Germany rather than suing for peace.  From this vantage point this seems amazing to me but history could have veered off in some very different directions.[2]

And yet there is also an argument that there is a larger pattern at play here: that the empires or powers with access to the most resources will almost always triumph in the end.  This is Paul Kennedy’s thesis in “The Rise and Fall of the Great Powers.”  It takes time, but might will out.  The argument would be that, whatever happened in the short to medium-term, the combined effect of American resources, massive Soviet manpower (and losses), a British Empire that was extensive in its geographic spread was eventually going to overcome what was possible with the disciplined and focused aggression of two slightly smaller powers: Germany and Japan.

Britain under Churchill was belligerent but could not have devoured anything without the combined resources of the Allies.  How that might have eventuated was highly unpredictable but, if the Allies stayed together, it would follow a familiar enough pattern.

[1] These events are covered in a new movie I have yet to see: “Darkest Hour”.

[2] A couple of great novels set in alternative outcomes to the Second World War are: C J Sansom’s “Dominion” and Robert Harris’s “Fatherland”.