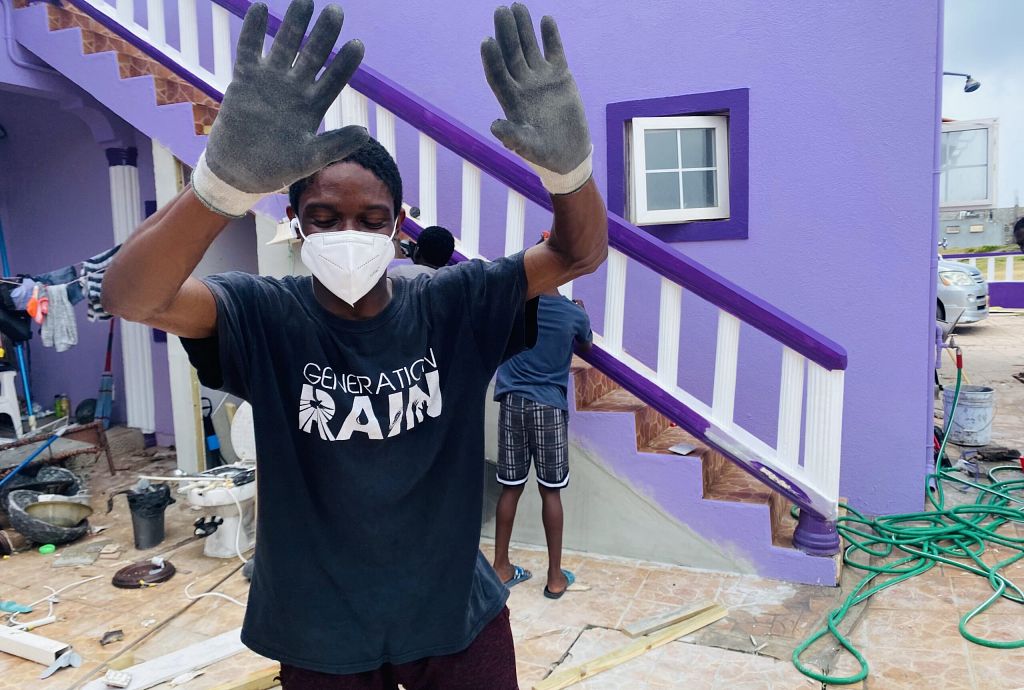 I trust my family’s resilience.

Fifteen years ago, when Dakari was born to us, the doctors told me he and his mom had a small chance of surviving. Dakari was purple, soundless, and motionless when he was delivered. Annesa was delirious and bleeding uncontrollably. I thought Dakari was stillborn and so I turned my full attention to Annesa. What followed was a tough six months of surgeries for Annesa and developmental assessments for Dakari. (He also had to put up with me as his primary caregiver. I initially stood about a mile from him while cleaning his bum.)

Over the years, we have experienced more than a fair share of challenging experiences. So, when three weeks before the Christmas holiday we had a major fire at home, the three of us jumped into action. We had some familiarity with crisis situations.

We rushed to his room. We realized the fire was coming from our room, adjacent to his. We opened the door and were attacked by the thickest cloud of smoke I’d ever seen. I backed away. Annesa rushed in. Then I rushed after her, but could not see anything. And the smell. Jeez. It was like being hit in the face with the force of a basketball thrown by your strongest cousin (yes, that’s happened to me before). It smelled like a combination of burnt chemicals mixed with overburnt cookies, rubber, and hot sauce. I can smell it now as I write this sentence. The force of the smell pushed me out of the room. That’s my story, anyway. Annesa returned a few seconds later in panic. She confirmed that the fire was in our bathroom.

We switched the electricity off. Then got everyone out of the house, thanks to Dakari, who went to the rooms where we had family staying and told them about the fire. Annesa called 911 (we live in Grenada). Actually, she initially called 119 (the emergency number for some parts of the world, including Jamaica where we once lived). We had a good laugh about that afterwards. I started pouring water on the fire from outside. Thirty minutes later, the fire was contained, the fire and police services arrived, and we were staring at our home in a bit of shock. After the firefighters and police officers confirmed that the fire was contained, they took statements and left. We were left behind. In the dark. We just stood there, outside our home, looking at the broken glass, the buckets we used to pour water on the fire, and at each other – with the marks and stench of smoke. We were frightened, grateful, and exhausted.

The next day, we, more like I, tried to carry on as normal. I facilitated two 4+ hour workshops and saw two coaching clients. I had planned on doing it the next day and the next day while we cleaned up. I quickly realized the error in my thinking and expectations. Cleaning up after a major fire is no walk in the park. We are still cleaning up. Four weeks later. We just kept going. The three of us. Cleaning up and coordinating the rebuilding process. We lost everything in our bathroom, most of our clothes, and our bedrooms and office were inhabitable due to the smoke and soot damage. We were displaced in our own home.

Dakari became unusually quiet about 2 weeks after the fire. He was moving around the house very slowly. He looked very sad. Annesa and I asked him what’s happening. “This is too much!!! Just too much! I’m tired, dad. I’m tired, mom” was his response before he started crying. That’s when I noticed the smoke. The smoke that was the precursor to my son, my family, and to me burning out. The past two weeks were nonstop for us. Everyday, we woke up to the smell and evidence of fire and smoke and immediately started cleaning. We would go until around 8pm. It was a lot. We consulted with contractors – builders, electricians, plumber, tilers, the bank, and insurance company at least once a day. We are so grateful for these incredible human beings. They’re thoughtful and quite skilled. Still, all of it was a lot for us to manage – both the physical and psychological demand and damage.

The thing is, we were not paying attention to the psychological impact of the fire. Why? I knew that my family was resilient enough to face anything. And that was a problem. My knowledge and trust in our resilience blinded me to the fact that this experience was traumatic for us. This trust and knowledge I had was burning us out. I needed to pour some water on how I was holding our resilience. I think resilience is important, even necessary for us to keep moving forward in the face of challenges. Scholars tell us that resilience is about having the ability to adapt positively, or successfully, in the face of stress, adversity, or other forms of disturbances that threaten our functioning and development. Without resilience, we would succumb to overwhelm. We would give up. Some of us would have a breakdown, get sick, or die. Resilience saves lives.

But to where? Where are we going? Where am I going? And where does resilience gets us?

Eon, the contractor who is helping us rebuild, lost his mother to Covid-19 the day before I wrote this blog. He showed up to our home, bright and early as usual, to work. Annesa and I have had no doubt that Eon cares about us and that what he’s doing is more than just about earning money. We asked him to go home, to take some time for himself. He stayed with us. He wanted to put up one more door. He said he would leave right after he was finished. He finished around 5pm. While working, he spent much of the time talking about his mother. We listened. They were very close. They cared a great deal for each other. Her death is hard for him. And he said, “I have to keep going. I’m still here.”

When I’m not putting out fires, I serve as an educator, coach, and facilitator. During the past two years, I listened to students, clients, and leaders talk not so much about getting better grades, changing their jobs, or improving their performance, but about caring more for themselves and those close to them. They are curious about how to prevent burnout for themselves and their teams. “It’s the human factor. I want my team to know that I and the organization care about them,” one leader told me recently. It’s as though both the quantity and quality of care pre-Covid are in question. They are no longer sufficient for our intensely disrupted and demanding lives. We need a more expanded and sustained standard of care. We need a resilience of care that transcends care as a strategy to keep people pacified and productive, for now, or until we get through Covid. We need more than to just get through Covid. We need care that stays with people long after they leave the classroom, their workstation, the boardroom, or zoom room.

I am realizing that the kind of resilience I described in this blog has run its course for me, perhaps for my family too. I still trust that we will keep going, keep moving forward. I doubt, though, that we will keep going the same way as before. We’ll at least take more stops along the way. I mean, what’s the point in getting to wherever we’re going and ending up in ashes, burnt out?

Where would I like to go instead? I am heading towards a culture of more care where people genuinely feel nurtured and dignified. That culture of care starts with me and with my family as we clean up the burnt and smokey pieces of our lives. We are taking care, and not just to clean up and rebuild, but also care to laugh, play, eat, and sleep. Maybe we are not so much taking a break from resilience, as we are taking care of loving ourselves and each other. We want to keep caring for each other even when everything around us is going up in smoke.

Today, or soon, ask people in your life: How do you experience care? And what’s one thing I, or others, can consistently do that would help you feel more cared for?

Get the care you need as well. How do you feel most cared for? Share that with people close to you.

P.S. – this is my account of the above mentioned events my family experienced. Although Annesa and Dakari both read this blog and gave their okay for me to publish it, they likely have different accounts and perspectives of these events. So, my account is partial.  Take it with a grain of salt.

2 thoughts on “Resilience of Care”