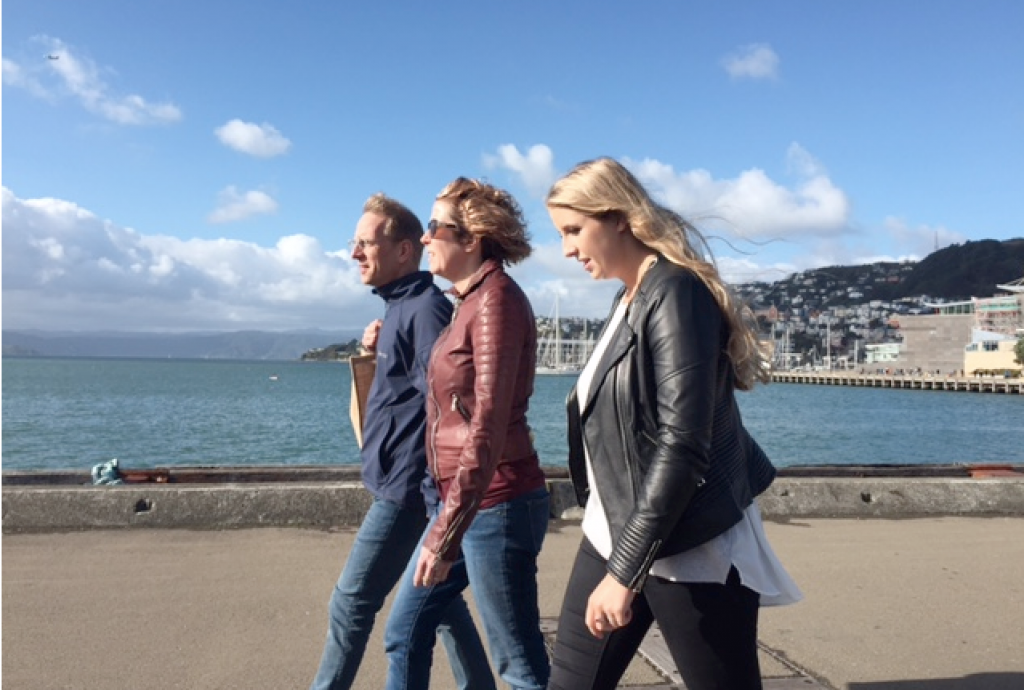 Few lines hit harder than the call to “walk the talk.” I first heard it somewhere as Stephen Covey’s influence penetrated nearly every corner of the corporate world about the same time I was entering it. It concisely and immediately exposed me. It is easier to say the right thing and harder to do it. Doing the right thing matters most, right? A leader’s credibility is at stake in whether they walk their talk.

I remember walking–no metaphor here–down Broadway in New York with a graduate school colleague, Dave, as I was talking out dilemmas now forgotten. What I do remember is when Dave pointed out that I used some phrase including “right,” as in getting something “right,” doing something “right,” finding out what the “right” thing might be. He also called out my use of “should,” uttered with an expectation I held about me in the dilemma, and hesitation about it at the same time. Dave’s interruptions became irritating.

Later, I became grateful. On one hand, perhaps getting something “right” and being on the hook for “should” were just verbal tics, handles on how I had learned to discern what to do. On another hand, with Dave’s voice still in my head and me now catching myself in the act, this might be a signal that there was more going on.

What became more visible later was the ideal of “right” was a bit misleading, maybe even an illusion. And the feel of “right” and “should” left me no room to maneuver. If I wasn’t committed to walking my talk, being and doing right, what of my integrity? There was an unspeakable question in me, getting stronger: What might be not so wrong in wrong, something that I needed to stay with and appreciate? Maybe my hesitation wasn’t immoral. Maybe it was onto something about the complexity I was in and what I wasn’t able to account for.

Around that time I found Karl Weick’s counter to Covey. He was most interested in innovation, and said that new things emerge when we were willing to “talk the walk.” By which I took him to mean: To go beyond the knowns, to explore, to put something at risk, even to get lost, as dangerous as that might seem. We might experience something, discover something of value that our words and what they represent—our talk— doesn’t know how to account for and might even feel wrong. If we stay open to these possibilities, we can talk it out. We can make sense anew. We and our worlds together can become better known.

To do that, I also learned more about how I needed to consult myself within. I couldn’t rely on all of  the borrowed “shoulds” that I’d picked up over time. I’d have to get better at making my own judgments and sorting out what mattered from my own perspective. I might even decide to change what I wanted to talk, and, in turn, change my walk.

The increasingly (slowly, over a long period of time) important question for me has been: What can I do within me that opens me up? And opens me up to what I historically thought was not me, what I didn’t believe, and what was strange and unfamiliar, and what I classified as “other?” What, or who, now would I need to walk toward and see what happened?

More questions took hold in me—meaning that they were working their own magic even if I didn’t have the phrasing and grammar to show for it. How can I recognize when the old reflex to find “right” and to follow acquired “shoulds” is closing down possibilities for good? Could I substitute the directional “better” rather than an ideal? And: How can I not worry about being seen as walking toward what others in my historic tribes might consider an enemy—whether in the form of an idea, a value, a group, or a person? How can I check my very old, cultured interest in purity (“holiness” where I come from) and not see the opposite as getting dirty?

What will happen to me (or you)? Will I fall into depravity? Will I fall apart, or otherwise disappear? Or might I (or you) become someone … wiser, not just older?

So while I still am learning my more complex talk from the inside-out, I am being called to keep walking into the thick of social relations where I don’t know what will happen, including what will happen to me. My boat will get rocked. I will misunderstand and be misunderstood. I will hurt someone. In some way, I will be the problem and must let that be okay.

The skills that are helping me, and that I like to believe I am getting better at practicing, are what I caught from Peter Elbow years ago. I instinctively knew what he said was valuable, but I wasn’t ready to do much with it at the time. What Elbow called the “doubting game” involves asking questions and taking a critical stance, not as a way to reject things but to find their limits. There is a time to play that game. The other game he called the “believing game.” This game suspends the protective automatic filtering that we tend to use to sort good and bad. Elbow quoted psychologist George Miller: “In order to understand what another person is saying, you must assume it is true and imagine what it might be true of.” Here you suspend disbelief and take the “other” on, or in, as fully as you are able.

Holding the polarity of walking the talk and talking the walk has shifted my idea of integrity. It has become less something I need to uphold or defend. Instead of aligning with my values I’ve sensed a softer, more inclusive notion of coherence that I can check in with. I can take on new things and prune out others, and let it all keep settling a bit into a fresh, if unfixed, coherence. I can tolerate more awkwardness as that happens. Integrity as coherence becomes more dynamic, more of a process, more of a verb and not a definite shape.

I miss Dave, as we’ve lost touch. I am also glad to say that I don’t hear his voice much in my head as I walk and talk with myself, though when I do, I laugh. I still walk and talk with others, and they tell me what they hear. I tell them what I hear in what they hear. I know myself better. Little things give way. I keep changing, even as I remain, in good ways, still me.

One thought on “Walking and Talking”