The Power of Not Knowing What's Going to Happen 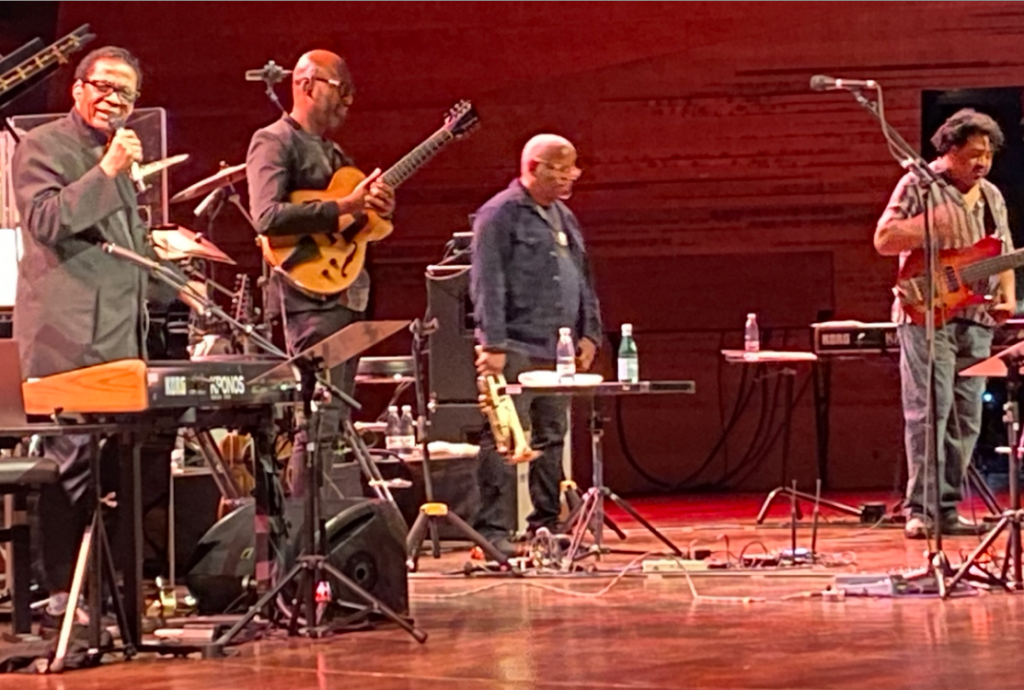 Herbie Hancock has just admitted that he is not sure what is going to happen next. I had invited Ida, my beloved wife, to his concert in Copenhagen. Coming on stage, Herbie enters a dialogue with us in the audience. “This is jazz. We improvise.” The whole hall cheers. “It’s like life. You never know what’s going to happen,” continues Herbie. “You need to improvise. You are all jazz musicians!” Triumph erupts.

Herbie is 82. I had been concerned that the organizer was trying to make the last few bucks from his famous name and that the performance would not be up to scratch. Herbie quickly turns my doubts to shame with his virtuosity, which ranges from an esthetic solo performance on a grand piano to creating a joint musical inferno on his funky synthesizer accompanied by the band.

During the concert, Herbie introduces his band members. His admiration for his colleagues is deeply touching. He emphasizes how lucky he is. “Sometimes, I feel like I’m sitting in the audience with you just listening.” A massive applause bounces back from the room. During the concert, each band member – a trumpeter, a guitarist, a bassist, and a drummer – plays several solos. The music’s point of gravity moves between the performers, often causing amusement amongst them. New harmonies keep emerging like a turning kaleidoscope of sound.

Herbie and his band embody the great paradox of jazz. This music genre is livelier than any other when it’s being created in the moment. Yet, hotels still play half-century-old jazz recordings in their elevators. No other genre has as many dead performing artists on its Billboard Top 100 list. Jazz needs the tension between the known and the unknown to stay alive. Eventually, all brilliant collaboration does. Each musician on the stage today has rehearsed beyond normal comprehension to earn their right to be part of the quintet. Still, they must listen intensely for the tiniest clues of what might be happening a moment from now.

There is no break where the band can relax, and the audience can step out and get refreshments. It’s just one two-hour-long set. At the end, Herbie leaves his piano and brings his band to the front of the stage. They thank us while receiving a standing ovation. Suddenly, Herbie interrupts, saying “Oh, I forgot” while moving back to his synthesizer. He presses the keys, playing the opening notes of one of his most famous tunes. We, the audience, break out in teenage-like hysteria, while the band joins Herbie on their instruments. This is not enough; Herbie rushes to a nearby table and straps on a shiny white keytar, an electric instrument like a guitar but with a keyboard instead of strings. He moves across to each of the musicians in turn, jamming out a duet with them, taking the composition to ever higher heights. The concert hall is in ecstasy. Time disappears.

When it all finally ends, Herbie smiles like a little boy and waves to everyone while dancing in pirouettes all the way out of the scene before disappearing backstage.

To me, Herbie is a role model for creative leadership. There is a saying that an artist does what an artist does and the zeitgeist does the rest. Herbie moves at a higher level. Over more than six decades, he has renewed his field and worked in ever changing constellations. It’s impossible to pin him down to a single style. Herbie has spotted, mentored, and kept improvising with each subsequent generation of creative musicians. He’s an astute listener, sensing what’s new and continuously stretching beyond the known. Isn’t that exactly what great leaders should do?

You may want to listen to some of them. I am not going to recommend the clean, original recordings of Herbie’s compositions from the 1960s and 1970s, which he and his band improvised around during this year’s Copenhagen Jazz Festival. The pieces are beautiful, but the spirit of this blog post has to do with what’s about to happen. I want to point you in the direction of the two youngest of the five musicians on the stage that night. They are at the front of jazz’s ongoing evolution. They helped Herbie to create new sparkle in his old material, but they also do their own innovative work. You can expect many great concerts from them and their companions for decades to come.

The guitarist Lionel Loueke grew up in Benin and taught himself to play jazz by listening to the radio. The result is distinctively personal with his African heritage present and emphasized by occasional click sound singing. Yet, he has mastered the finest qualities of the Afro-American jazz tradition. Loueke has his own trio. Their first album Gilfema demonstrates gently and poetically how he marries his different sources of inspiration.

The drummer Justin Tyson is a member of R+R=NOW, probably today’s most cutting-edge super group, comprising the pianist Robert Glasper and the trumpeter Christian Scott aTunde Adjuah, amongst others. None of them leads; instead they improvise collectively. Accordingly, the two Rs in the name stands for “reflect” and “respond.” Tyson’s own creative process often involves changing what drums he brings along to a concert and how he places them. Nothing is static or plain repetition. His play is incredibly intense, energetic, but still harmonious. This can produce quite a tasty mouthful, like on the album R+R=NOW Live.

A smoother introduction to this sphere is the album Covered (Live). Here, Glasper plays cover versions of tracks from his Grammy-showered Black Radio project. He’s on the piano in a classical jazz trio with bass and drums with various artists as guests stars appearing here and there.

And if you have more appetite, Kamasi Washington, Nubya Garcia, and Ashley Henry are the names of some other amazing young artists. Harmoniously, they integrate new with old jazz styles and jazz with other genres. Almost anything is possible with the power of not knowing what’s going to happen.