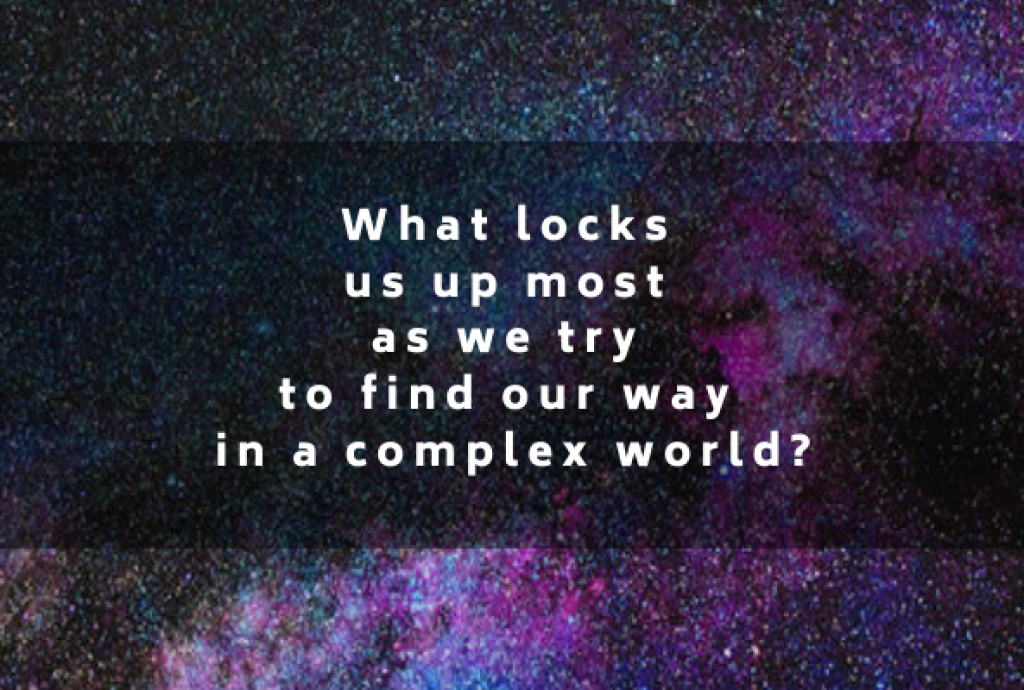 In the past ten years, as I have been paying attention to research across social science disciplines and working with leaders in every sector around the globe, I have noticed the emergence of the strangest phenomenon. We all know that leaders are working to deal with a massive upsurge of complexity, uncertainty, and ambiguity in their lives. We know that this context is daunting. But what I’ve noticed is a perverse and pervasive complication:

In many areas, it’s not that our reflexes are just
a little bit off for the times we face
and need to be tweaked or updated;
it’s that in some cases,
our reflexes are exactly wrong.

They tell us to turn left when actually we should be turning right. The coding of our minds has a bug when we are working in complexity, and that bug sets us on a course of action that is the exact opposite of what the situation really needs.

This odd bit of mis-coding means that leaders are busier than they’ve ever been, working longer hours, finding technology that squeezes out more and more capacity, and yet they are still falling behind. It’s not only that the demands on them are so much more time consuming than they used to be (although that seems to also be true). It’s that the nature of the challenges has changed in such a way that the tools and approaches of the past simply don’t work. Even more disturbingly, the cognitive and emotional shortcuts honed over the course of tens of thousands of years of evolution in a relatively simple world, turn out to lead us exactly astray in the world we live in now. It’s as if the shortcut you took across the park every morning looks and feels exactly the same as it did before, but lands you at the women’s high security prison rather than your office*.

All of this creates a stress on the system outside us, but it creates a similar—and much harder to see—stress on the system inside us. Our experience isn’t the helpful compass it once was. In the past, when things were changing more slowly and we were less interconnected, you could rely on your experience to give you a pretty strong sense of what would probably happen next because the future was likely to be pretty much like the past.

Frustratingly, the fact that our instincts lead us astray doesn’t seem to make us less likely to use them. Our reflexes and habits are so automatic that we use them whether they’re helpful or not. Imagine needing to listen to an emergency update and trying to tune your analog radio to the internet. You might try harder, be more precise with the dial, move the radio into another room or fiddle with the antenna. Until you realize that you’re working with the wrong tool entirely, you’ll get stuck trying to make it work. Some of our leadership instincts are like that too:  tempting to use again and again even when there’s no chance they’ll work. The leaders I work with have been begging me for some simple way to help them recognize when they are in the danger zone. My new book: Unlocking Leadership Mindtraps: How to Thrive in Complexity is the answer to that plea. I’ve collected the five most pernicious and pervasive of these “mindtraps” in order to help people figure out which impulses to trust and which to escape from. To get out of a trap, we need at least two steps. First, we have to know that we’re in a trap in the first place, and secondly, we need a key to get us out.

Over the next five blogs, we’ll explore these mindtraps, look at the ways they’ve served us so far, and consider why they don’t work so well anymore. For those of you who have read the book already, I’m hoping this is a helpful summary and reminder. I’d be grateful if you let me know how these ideas are resonating for you. For those of you who haven’t read it yet, I’m hoping that this will offer at least a glimpse into the ideas.** If you’d rather hear all about them now in a webinar, you can skip ahead to here. Let the unlocking begin!

*True Googlemaps story: I knew it would be funny afterwards.

**Ok, and I’d be lying if I said I weren’t hoping that some of you might even want to now read the book!

One thought on “Unlocking Leadership Mindtraps”