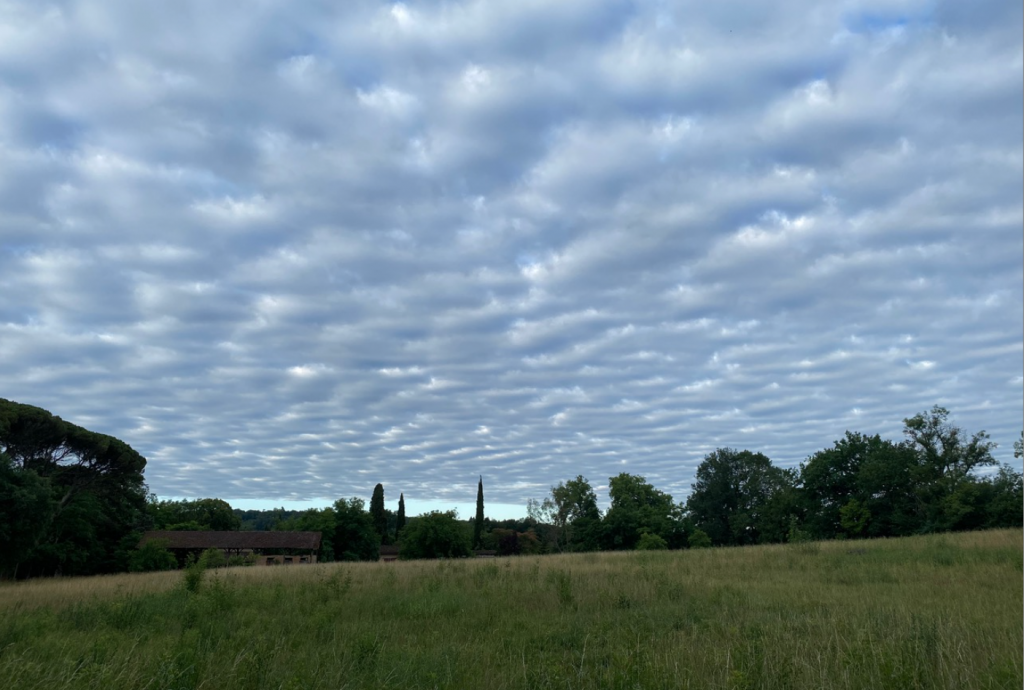 This week it has been raining. The walk around the pond was squishy and slippery this morning, and Aria came back from her romp with muddy paws. The swimming pool has gone green with the combination of last week’s heat and this week’s rain. And dinner last night was an interrupted affair as I had to leap out of my chair and rush around the house, closing windows against the storm.

I remember living in London last summer, the weeks of beautiful weather like a balm, London’s typically grey sky a brilliant blue. Even as the plants in our postage-stamp of a back yard wilted, I didn’t have it in me to wish for rain. I had had my fill in the soggy winter, and I watered the plants and hoped tomorrow would be another sunny day.

But now I live in the country where my enjoyment of the brilliant blue sky has not been enough to distract me from the difficulties of a few weeks with too little rain. The sunflowers in the field across the way have been stunted, the ground cracking around the rows of small, wilted stalks. Our lawn has gone yellow, and the waist high meadow grasses are starting to get crispy. The herbs in their pots on the back terrace have required constant attention. So even though a rainy day is less delightful for me, less delightful for Naomi who is visiting, when the sky opened during dinner last night, we were all joyful about it.

Somehow this makes me think about all the ways we live in circumstances where we privilege what’s enjoyable even though it’s the full spectrum life that is most healthy. The one that comes most quickly to mind is conflict. Live in an organization (or a family) with a “nice” culture and you might love the sunny ease of conflict free conversations. You might focus in on what it feels like each day to have meetings that are smoothly cloudless, and you might enjoy the light breeze of friendly banter in the moments waiting for the latecomers to show up. But when we step back from such a string of easy interactions, we sometimes discover (often too late) that the conflict-avoidance has been acting as a poison at the root level, leaving the relationships barren and brittle. And yet it’s so hard (for me at least) to yearn for conflict when the blue sky of harmony is so soothing.

But here’s the thing. Life lives fully in its opposing parts. Having relationships without conflict is kind of like having Junes without rain: pleasant in the moment and desiccated by July. The big difference between rain and conflict, though, is that we get to actually choose the conditions of how we go about it and how we respond. In February when the river flooded, I stayed inside, and I hoped the river wouldn’t cross the street and lap at our wall. But when I am flooded with embarrassment or anger or sadness, I don’t have to just wait it out and hope the emotions recede without causing any lasting damage. I can choose to have conversations about these emotions with others and engage in the full spectrum of human possibility.

I had a client who was frustrated by what she saw as self-oriented behavior in one of her colleagues on the leadership team. It was a gentle frustration, just a feeling, and not particularly attached to a piece of data that she felt was worth having a conversation with him about. She told herself to get over it. But then in the next meeting he would defend some decision he’d made or some lower-performing team member, and she would feel the tinglings of annoyance—maybe even strengthening into anger. She noticed that their general cheerful banter now had an edge to it—at least in her voice. She knew she needed to talk with him, bring some rain so that the sky would be clearer later.

She also realized that while she really wasn’t looking forward to the conversation, there were ways she could make even the difficulty useful. She remembered to bring up the issue as something that was on her mind and not as the truth. She remembered to be as clear about it as she could even as she was offering more of a felt sense than a specific set of data. And she remembered to be very curious about what was going on for him and not give into the frustration of her own feelings and tell him to change. She could channel the rain of her negative feedback without flooding everything.

And while the conversation was hard, the outcome was amazing. He had feedback for her too, that perhaps she was more sharply defending her patch than she had noticed. They wondered together whether the pressures of budget cuts had started to degrade what had been a really collaborative relationship. As they walked back from their coffee in the nearly deserted cafeteria, she could almost smell the fresh wet scent of rain, could almost see the crisp air, washed clean.

Wondering whether your relationships are full spectrum, whether they have enough of the rain of conflicts along with the sunny days of harmony, might help you wash away some of what naturally builds up between you. Having difficult conversations with clarity that is also open, with curiosity rather than judgement, creates the channels for conflict to be nourishing rather than destructive.

And here in France, the weather is forecast for rain for the next week or so. Our plans for the weekend will be curtailed, the chickens will get bedraggled, and the ripening tomatoes might burst. As we have all noticed, nature these days often tends to extremes. Still, I’m grateful for the quiet contemplation of days writing in the driving rain and I’m keen to see how much the sunflowers have grown after their deep drink. I’ll take the full spectrum life over the brittle pleasantries of the cloudless sky.