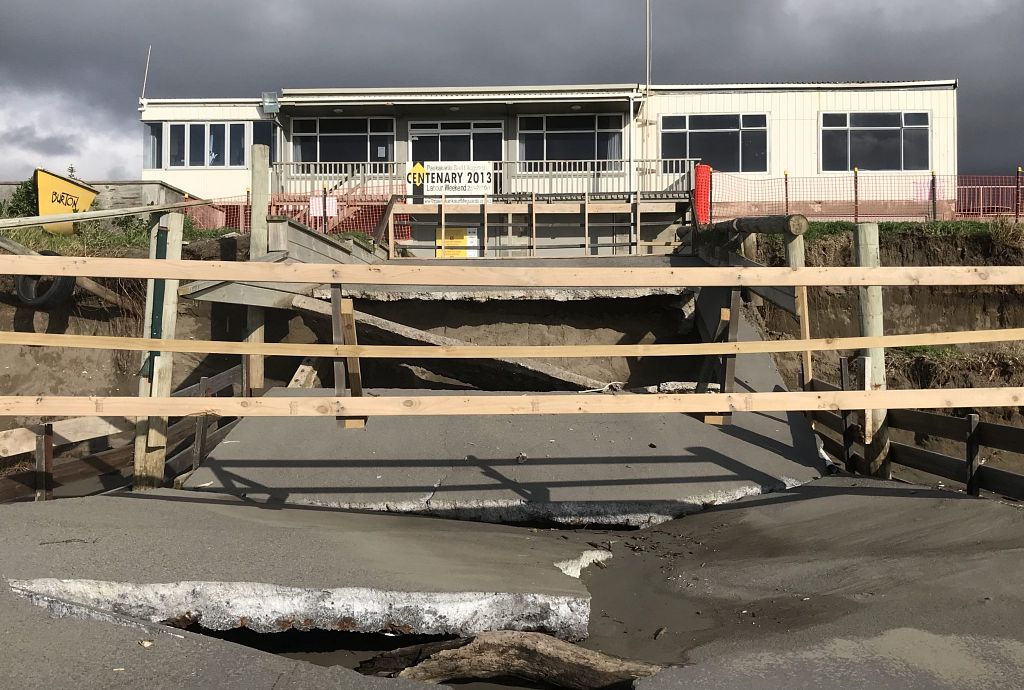 The beach is a couple of minutes walk from our house and standing nearby is the surf lifesaving club with a concrete boat ramp running down to the sands.  In the 23 years since we moved here, we have watched these sands advancing and receding up and down the ramp in the dynamic way that open beaches do.  But in all that time the ramp has never been fully exposed.

Until a few months ago.  Then the whole length of the ramp was suddenly revealed for the first time since we have been here.  The degradation continued.  That’s a geological term, by the way, used for sand being washed away off a beach or rivers wearing down rocks or banks.  Beaches aggrade and degrade.  Who knew?

The degradation continued to the point where our aging Labradors could no longer get down to the beach because the step that had formed at the toe of the ramp had grown too tall for them.  Then the concrete ramp was undermined as the sands beneath it were washed out.  This became a cavity that attracted more waves and more washing away.  Our dogs would peer in curiously at this enlarging cave.  The ramp was fenced off as a hazard.  Not long after that it collapsed completely.

Contemplating this jumble of reinforced concrete left me thinking about tipping points and the Trump presidency.

In complex systems we can expect the unexpected.  Probability curves have fatter tails than we expect.  Multiple events combine to make what seems to be highly improbable a little more probable than we imagine.

As the sands were washing out from around our local boat ramp I was wondering if this were a metaphor for the Trumpian regime.  Had the tide turned?  A presidency does not disappear overnight.  But, with the coming of the impeachment inquiry, was this the ebb?  The surprise surge of a ‘perfect’ but revealing interview transcript takes out a load of sand, then a slew of texts between officials sucks out more.  We settle in to the rhythmic flow of one after another cautious government official testifying.

Yet this tipping point has been forecast many times before.  Many things that would have sunk a conventional politician have been brushed aside by Trump’s base or even reinforced his charms in their eyes and convinced them that deep and swampy state is out to bring him down.  That this is not the time for questions but rather to rally round.

It seems to me that we are most conscious of tipping points on a couple of occasions: 1) after they have occurred (when they look blindingly obvious) and 2) when we desperately want them to occur – to rid us of a maddening monarch or when our favourite sports team is on the verge of a crushing defeat and we are praying for divine intervention.

The imaginative agony of fandom is, in a way, a blessing for us.  Its delusions can plague us but our hopeful selves see things as they just might be.  We can be remarkably inventive when we imagine unlikely sporting or electoral comebacks because otherwise all hope is lost.  And just once-in-a-while unlikely comebacks do occur; they are the exceptions that prove the rule.  This agility can also be used when we face run-of-the-mill situations and cannot imagine things being different, when the ramp or the regime looks like it will last for decades.  We can ask ourselves, what does the improbable look like?  For good or ill, how might we respond?

There is a second way that coastal erosion can be our complexity guide.  In the face of the climate crisis and the probability of rising sea levels, the council responsible for the park next to our house has decided on a policy of “managed retreat”.  As facilities are threatened they will be removed.  A pedestrian bridge over the stream has gone, the surf club building will be replaced by one further inland, roads and toilet blocks will be removed.  The park is big enough to be able to handle this because there is room to retreat to.

Often our response to the threat of coastal erosion is to resist.  We have so much at stake that we try to build defences against the sea.  This often does not end well.  In a dynamic system, sea walls and other structures divert the energy to either side moving the problem up or down the coast, or they get breached and hollowed out from behind.

We can see this pattern in the responses of Donald Trump and the Republican party as they face the impeachment inquiry.  There is a desperate building of structures to withstand the onslaught and to push back the waves. They are sandbagging in both senses of the word.  In this case, the need is to make the party and individual politicians so dependent on Trump’s base and his bully pulpit that they dare not disagree.  The attempt is to turn the presidency, the party, and loyal media into a powerful self-organising system or basin of attraction that whatever comes into its forcefield can be bent to its will.  In this way it can ride out the storm.  It might succeed?

But what if it doesn’t?  What happens then?  To mix metaphors, who jumps ship and who is lashed to the mast?

Tipping points occur when the system shifts from one of these powerful basins of attraction to a new state.  From politicians cleaving to the President because there lies salvation to starting to peel off to a more independent Republican party again.  From changes in the coastal environment occuring within an expected band, with sand coming and going and the stream snaking about in its bed, to a new state where the variation is so dramatic that buildings and ramps and bridges need to be removed and more space is given over to waves and stream and beach and dunes.

There is another story that came to mind, although our dogs tell me it is insensitive for me to relay it here.  Block your ears old fellas.

Ryszard Kapuscinski, was a Polish foreign correspondent in the 1960s, 70s and 80s, in the later years of the Polish communist state.  At the time he was Poland’s only foreign correspondent.  His specialty, dazzingly displayed in a trio of books, was wryly observing the fall of dictatorial regimes.

Kapuscinski headed to Luanda in 1975 to watch the collapse of Portuguese Angola and what became the new country’s descent into civil war.  Everyone else was heading out as he was heading in.  Many of the colonial residents had got out so fast they had left their dogs behind.

“The dogs were still alive.  They were pets, abandoned by owners fleeing in panic.  You could see dogs of all the most expensive breeds, without masters – boxers, bulldogs, greyhounds, Dobermans, dachshunds, Airedales, spaniels, even Scotch terriers and Great Danes, pugs and poodles.  Deserted, stray, they roamed in a great pack looking for food.”[1]