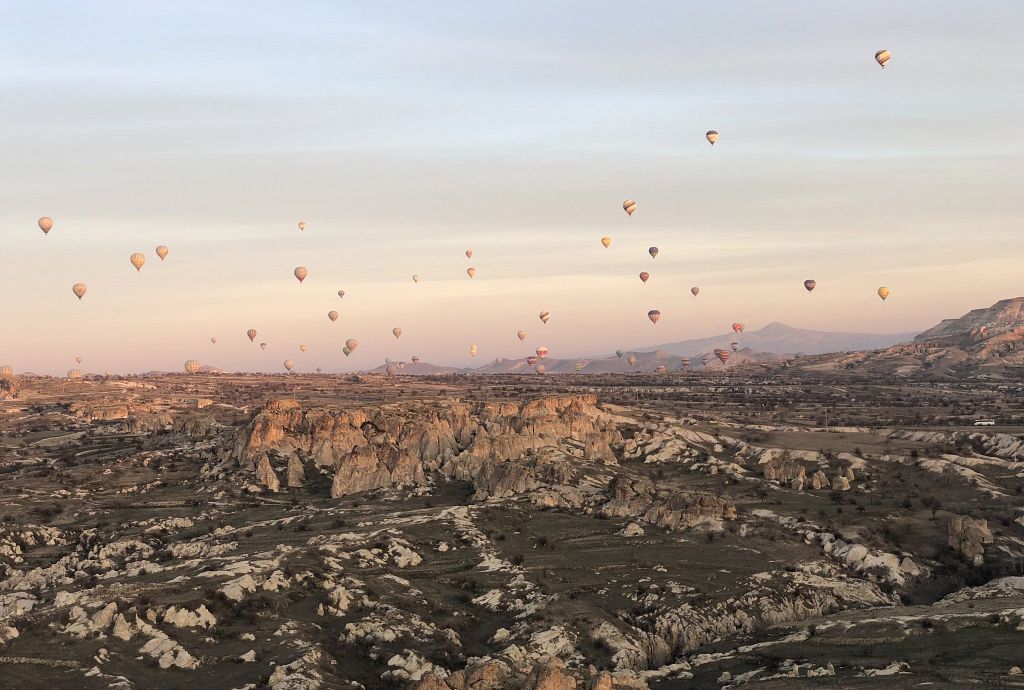 It is dark as the van rumbles through the town, and, in this land of strange rock formations, we can’t be blamed for thinking the grey hulking shapes we are passing are just more of the fairy chimneys that make this landscape extraordinary. But then the flame goes off and we all gasp collectively—those are the balloons, fields and fields of balloons.

It is colder than we expected in late March, and we have piled on layers of sweaters and coats. We stand around and watch our balloon fill, first on its side, and then suddenly up in the air. My family hops into the basket where we are shoulder to shoulder with each other and the other 15 people on board (who knew there were baskets this big? And this one isn’t the biggest). The sound of the flame is deafening, and when it is off, the sound of the silence is nearly as loud. We watch the other balloons take off and join their companions in the sky, bright striped lanterns so close we can nearly touch them. We wonder when we will get into the air too, and, as we wonder, we realize we’ve done it. We’re flying.

Five years ago, on 27 March, I was three days into my first chemo round. I was just starting to feel the effects of the chemotherapy, finding myself more exhausted than I had ever been before, more afraid of the future. I had an almost impossible time picturing myself at the end of the chemo journey, and I just wanted my old life back (you can read about that here). Three years ago, on March 27, I was struggling from the fatigue of radiation from my second time with cancer (you can read that one here). On neither of those days nor on any other day ever in my whole life did I imagine what it would be like to be soaring above the haunting landscape of central Turkey in a hot air balloon.

And neither, on any 27 March before 2014, had I ever imagined myself in cancer treatment.

That’s what life is, really. And it’s what complexity is. We cannot imagine a future different than the path we’re currently taking, and we don’t have tons of control over some of what happens to us.

The balloon was like that too. As we drifted up, snapping endless pictures of the sunrise, the other balloons, the mysterious shapes below us, the captain was moving from side to side of the balloon, turning the flame on and off, checking his instruments, sending us farther up into the air and then dropping us down. As the ground got closer and closer, I got nervous—not that we would crash, but that the magical ride was over. I asked him what we were doing. “I’m trying to get us back over there,” he said, nodding in the direction where all the other balloons had gathered, a direction we were drifting away from. “I can’t find the right wind current to push us that way, so I am trying close to the ground to see if I can find wind down here.” By now we were four meters above the ground, moving at some speed towards a small apple tree in full bloom. “I can’t control the direction of the balloon much at all,” he explained, pulling on various levers that made small shifts in our direction. “I need wind to do that. I can just search for the wind.” He made a movement with his hands like a dance, and we pulled a very tight, very fast U-turn around the tree, the top branches close enough to smell.

This is complexity too, I think. We cannot control the direction of the winds, but we can search for currents that take us in the right direction, taking risks by going high high (but not too high) or low low (but not too low) and managing our micro reactions to the winds life sends us (to pull ourselves around flowering apple trees or market crashes or cancer diagnoses). We can work to get ourselves in the flow of a direction we think will be good for us, but we need to be prepared, as our captain was, to pull up from that direction if the signs shift.

Our captain found the current, finally, that brought us back to the heart of the valley as the sun rose, casting stark shadows below us. The women in the basket compartment next to us snapped selfie after selfie, shrieking with laughter and speaking Spanish in giggly, staccato tones. My little family breathed in the dawn air, just stunned at a morning that seemed to get more beautiful in every second. As I watched myself watching this beauty, I was surprised to hear the piece of me that wasn’t fully there. Even as I was astonished and moved, there was a small voice in me about how others had this better (wasn’t our side of the basket mostly in the back? Weren’t those balloons over there seeing a more beautiful part of the landscape?) and another small voice about how fast the time seemed to be going, about how soon it would be over and behind me and I would be so unlikely to ever be in Cappadocia at dawn again.

Those voices that pull me into this judging, deficit-centered place were poisonous for me during cancer treatment, they’re poisonous for me as I write my books, and they were poisonous for me as I floated above this spectacular landscape. I get that there is a helpful quality to the drive for improvement, but there is such a cost of it—for our happiness, for our planet. I felt my feet on the floor of the balloon basket, watched the light glint off Naomi’s sun glasses, heard Michael and Aidan laughing together, and pulled myself to be fully present, fully alive, fully in that magical moment.

And, when it ended, I was present with the ending too. The gentle winds pushed us easily down towards the fields below us. The chaser truck caught up with us and five men tumbled out, laughing. The captain had told us that there were two kinds of landings—Russian (where you braced for impact and hoped for the best) and Turkish (where you watched and admired the skill of the captain) and today was a Turkish landing. What that meant in practice was a sophisticated collaboration between the captain, the driver of the truck, and the laughing men. We landed on the truck bed, pulled up a little to get us centered, got lashed down to the truck bed, pulled the whole truck up a little as we tried to get into the best place for deflating the balloon, and finally were climbing out of the basket and on to the stubbly, frozen field.

The ride was just about the most beautiful thing I’ve ever done in my life full of beautiful things. And it reminds me of four key complexity lessons.

We drove back to our hotel, thawing out and quiet. Over breakfast, looking out at the last balloons over the valley, we tried to talk about what had made that experience so magical, so unlike what we had expected, so unlike anything else we had ever experienced. We found, though, that our superlatives wore out, that our pictures were flatter and more colorless than the experience had been, that we had no words for the beauty we had experienced. We drank our dark, thick Turkish coffee and watched the last balloons land, not knowing what any other March 27 might be like, not wishing to be anywhere else.

One thought on “Turkish Delights: A hot air meditation on complexity”