Both Jane and Tarzan 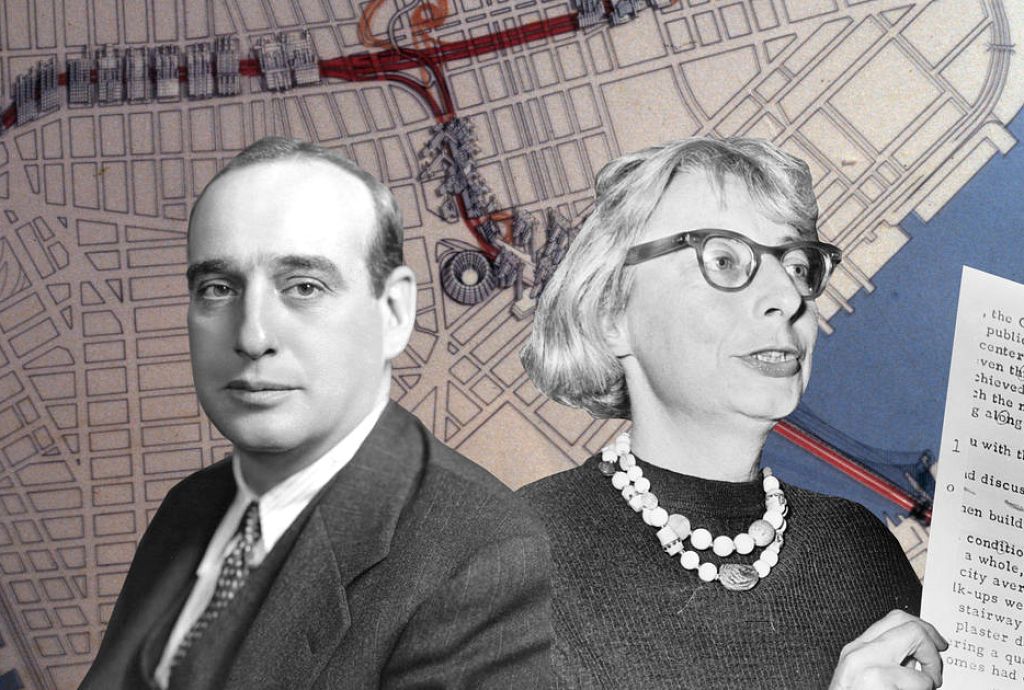 This is a tale of one city, one movie, and two books.  Between the two books we find a central polarity of governing and urban planning.  Let’s call it the polarity of Jane and Tarzan.

Among the piles of books I have bought but not yet read, I often discover delights and surprises.  Sometimes, however, the treasure of a good book eludes me.  This happens when I have given the book away before reading it, only to discover later the joys I missed the first time around.

Book one in my story was in the second category, a disposed-of-when-still-unread-treasure; book two was in category one, a lurker in the pile.  Both are important books based in New York. Both their stories came together yesterday when I watched the film Citizen Jane: Battle for the City.

The movie tells a fascinating story of the urban activist and author Jane Jacobs.  It focuses around her central role in the community struggles in New York in the late 1950s and early 1960s, fighting against the building of Manhattan expressways and large-scale urban renewal projects.

Back in the late 70s, when I was studying for my undergrad degree in urban planning, I bought a copy of Jacobs’ most famous book The Death and Life of Great American Cities.  Alas, I gave it away many years later, unread.  Had I read it then I could have got ahead of myself. In the event, it was another 20 years before I discovered chaos and complexity theories, the explanatory power they offered, and the complex systems that we all live and work in, including cities.

Jacobs wrote about what actually happened in cities, how they functioned as organic and complex social systems, and how these concepts were misunderstood or ignored by urban planners and engineers.  Her book was one of the earliest applications of complexity theory, which had hardly even coalesced into a theory when she was writing in the late 1950s.  She applied the early thinking expressed in Warren Weaver’s essay from a decade before, Science and Complexity.

Author Steven Johnson describes the excitement of discovering Jacobs’ work, forty years later, when he was researching his book Emergence: “From page one, I felt like all the ideas I’d been shuffling around in the dark were suddenly illuminated by Jacobs’ account of how dense, urban neighborhoods worked. And when I got to the conclusion, where she explicitly invokes Warren Weaver’s visionary essay … I remember feeling this amazing shock of recognition and connectedness. So my little trail of bread crumbs was actually leading somewhere after all, and it was Jacobs who ultimately persuaded me to keep following them.”

The film Citizen Jane is set up as a David and Goliath drama, or perhaps a Jane and Tarzan saga, where Jacobs is, well, Jane…and Tarzan is Robert Moses.

Bob Moses did more to shape New York, city and state, in the 20th Century than any other individual.  He was city and state parks commissioner and city planning commissioner, bridge and highway builder, and urban renewal czar for periods of 20 to 40 years.  He held many of these roles at the same time.  He was a mix of charmer, bully, bureaucrat, builder, drafter of legislation, megalomaniac, and total law unto himself.  He made arrogance and almost absolute power into art forms.  He became habituated to imposing his will, through his projects, on the city and its communities.  But in the early 1960s he overreached himself and was tripped up by a series of campaigns with Jacobs at the core.  An expressway across Soho was turned down and urban renewal schemes were rejected.

Moses is captured brilliantly in book two: Robert Caro’s magisterial 1975 biography The Power Broker: Robert Moses and the Fall of New York.  The only thing bigger than Moses is the book itself; I am 500 pages in but still not yet halfway!

The biggest polarity I see in all this is Jacobs’ bottom-up view of planning for the city (understand the complex workings of the city and adapt and nudge these to make change) and Moses’ top-down engineering of the urban environment (get going with grand designs and just keep going: bash through constraints, bowl things over, and get things built).  Nowadays Moses’ I-know-best arrogance seems anathema to most of us.  But it had its uses, especially in the early years.  It seems fair to say that most of the parks and parkways around New York would not have existed without the Moses bull rampaging through the china shop of established elites, especially on Long Island in the 1920s.

This is of course an oversimplification.  However, bear with me.  To establish the network of public parks on Long Island, and the parkways to be able to drive to them, Moses, with the backing of the Governor, had to take an axe to the existing political system.  With a mixture of chicanery, confrontation, co-option, and public campaigning, he transformed the system.  In the jargon of complexity theory, he created new basins of attraction.

Again I oversimplify, but the Jacobs approach was to understand the subtlety and dynamism of the richly diverse city and allow that basin of attraction to adapt and grow.  She clearly predicted the ways these engineered and renewed city neighbourhoods were going to die because the approach ignored social complexity.  And they often did die.  Some of the most telling images from Citizen Jane are the dynamiting in recent decades of the housing projects built in the 1960s.

This top-down, bottom-up polarity has another, and richer, form in the work on resilience (the ability to continually change and adapt while remaining within critical thresholds).  In building resilience, in organizations or cities or ecosystems, choices are regularly being made about how much we are trying to adapt the system to make it more responsive and resilient (Jane Jacobs) or trying to transform it to a new system or basin of attraction (Robert Moses).  These choices arise at different scales.  For example, we might reorganize or remove a branch of the organization to enable the whole organization to adapt and be more resilient.

These simplified polarities help us to think about the choices we face.  Are we leaning to hard into bottom up or top down?  At this scale do we want to be stressing adaptation or transformation?  Steven Johnson blogged a decade ago that more balanced approaches were leading to the creation of more liveable cities in many parts of the world, including New York. “[I]n the past few years, we’ve seen some extraordinary developments in the design and technology of city life …. that combine the ambition of Robert Moses with the sidewalk nuances of Jane Jacobs.”  Tarzan and Jane living happily ever after?

Next: Things Donald Trump might learn about enabling self-organizing systems from the biggest New York property developer of them all.