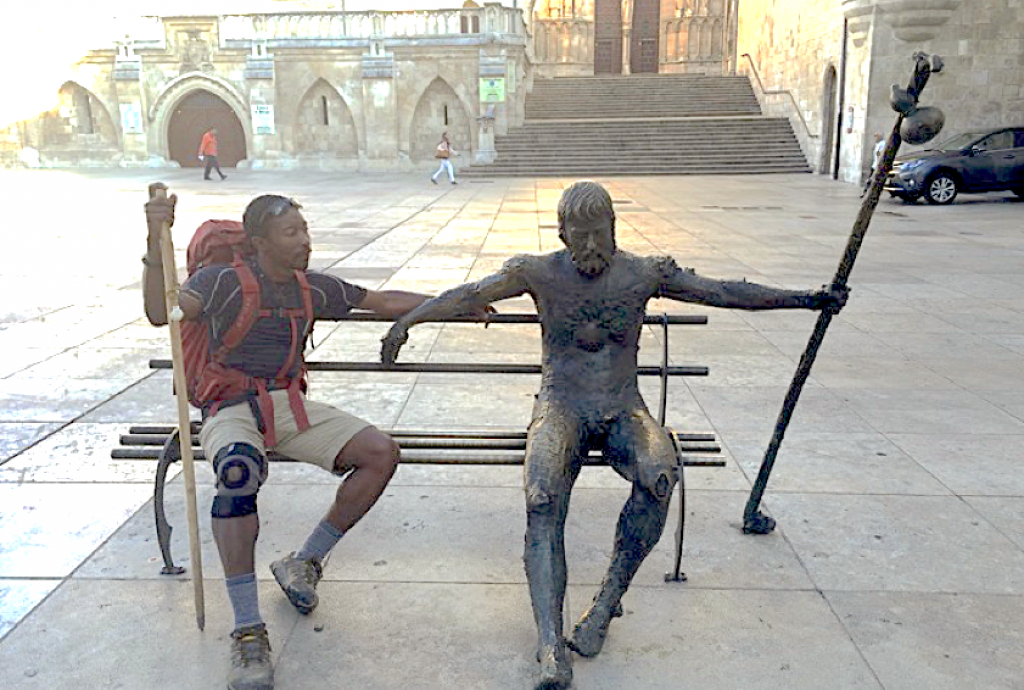 While facing the one light of many worlds.

In a new home that has claimed me as its own

And being embraced by the Dark.

In the shadowy depths of the Self.

– Akasha, Path to Being

In parts one and two of this three-part blog series, I shared nine things I learned about adult development from walking the 500-mile Camino de Santiago pilgrimage. In this entry, I discuss the 10th and final lesson.

10. People like me matter – those of African descent and colonized cultures

Making friends with an unmoving pilgrim

The final lesson I want to highlight here is that people like me – those of African descent – matter. This is a BIG lesson for me. People of African descent are largely missing from the roads leading to Santiago and from the pages and spaces that focus on adult development.

Of the twenty thousand plus pilgrims who walked the Camino during the month I did, I saw 3 other Black pilgrims. When I attend developmental workshops and other experiences I see similar small numbers of Black participants and even smaller numbers facilitating those experiences. There might be many reasons to explain the low number of Black people walking the Camino and participating in developmental experiences. I have a hunch that at least two factors are involved. The first has to do with systemic barriers (that may be class and race related) and the second relates to the colonizing danger involved in adult development.

Although the Camino has been secularized over the years to appeal to more diverse pilgrims, it is a historic Catholic pilgrimage. Colonizers have oppressed people of African descent for centuries in the name Catholicism and Christianity. Colonization is largely about power and White supremacy. History shows that White cultures, backed by economic and religious power, invade other cultures and rape them of their dignity, resources, and indigenous worldviews. In order to accomplish this, they must see these cultures as inferior and needing enlightenment and salvation. Adult development has a similar risk.

Adult development theory is developed and promoted mostly by White Americans and Europeans. After fifty years, the theory has maintained this Whiteliness and euro-centricity. I am complicit in this, for even as I make this point I acknowledge that almost all my colleagues and the sources I have referenced in my work are White. The fact that White people developed adult development theory and the field is not the issue. My observation is that even at 50 years in, and in a world that is increasingly diverse, I am not citing the works of Black developmentalists from non-dominant cultures, including indigenous ones.

So, I ask the same question I asked on the Camino: where are the Black people?

While working on my doctoral dissertation, where I explored the relationship between Afro-Caribbean meaning-making, spirituality, and constructive development theory. I wanted to consult with a Black adult development scholar/practitioner, or someone who had intimate knowledge of meaning-making for people of African descent. I asked around in many adult development and integral communities. I reached out to well-known scholars and authors. I kept hearing from people that I talked with, who were all White, “Sad to say, I don’t know of a Black person in this field. Sorry.”

I appreciated that these scholars took the time to meet with me and respond to my emails. At the same time, I was disappointed in the apparent lack of inclusivity and cultural diversity within their professional network and within the adult development field. If they did not have Black colleagues or know of any Black person in the field, it would seem that their studies, articles, and work were focused primarily, if not entirely, on the experiences of people like them. Their work advances the meaning-making capacities of White people. What about people of color in general, and people of African descent, in particular? Are we already so advance that we do not need any further support around our development? Or, are we undeserving of developmental support?

Of course, there are many other ways to explain this phenomenon, including that Black people might be tired of being assessed and labeled by the tools and methods developed by the descendants of their enslavers and colonizers. This is the colonizing danger and it is understandable, but it would also be to our loss as a race and as a part of the human family to not attend to our development. How are we meeting the environmental, economical, and political challenges of a world that seems to be increasingly volatile and violent towards Black people and other cultures of color? Are the ways we are making meaning of these atrocious experiences in service of our growth? What might support our growth in the face of anti-Blackness? I do not know the answer to these questions, but I intend to find out.

I do know that there is value in broadening the scope of the field of adult development to include models and theories from people of African descent, indigenous cultures, and other cultures of color. The lived experiences of people of African descent may or may not reveal something novel about development because of our shared journey with and response to colonialism. I say this knowing that our diverse geopolitical history likely creates significant distinctions in our way of being in and making meaning of the world. I understand that adult development is not just about the meanings we make, but also about our (cognitive) capacity, or meaning-making system. I do not believe that all meaning-making systems are developed equally. Some might be colored by racism and covered with the bruises of persistent socialized inferiority. I cannot help but think that people like me are in need of healing, love, and liberation. I see adult development delivering on all three.

The Camino pilgrimage experience was a developmental journey for me. As I walked those 500 miles, new meanings, new ways of making meaning, and new ways of being in the world unfolded. Since the Camino in 2016, I have found that these new meanings, ways of making meaning, and ways of being in the world have helped me meet the demands of an increasingly volatile, uncertain, complex, and ambiguous world. I do not credit the Camino pilgrimage alone for these shifts. However, it was a significant catalyst. I do not speak only of the physical Camino, but also of the metaphorical one that many people walk everyday as they journey through life in search of a sacred center, deeper meaning, and clearer purpose. I believe that one of the most important things to do today is supporting people along this journey, along their developmental pilgrimage. That is why I am here.

Arriving at one destination before moving onto the next one