Lessons from the dog park part 2: Asking different questions, listening to learn and being vulnerable 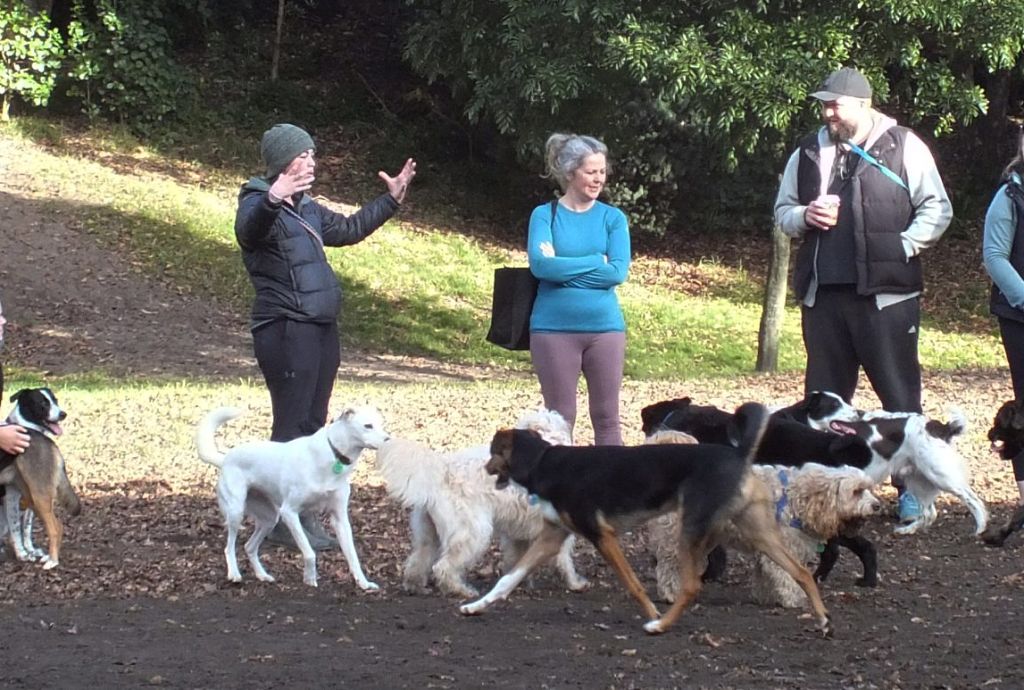 The dog park is an equalizing place – a bit like schools with uniforms, everyone has something in common – their doggie companion/s, and everyone dresses down because we get dusty or wet and muddy, and covered in doggy love.

We are in nature, which is known to be restorative and for an hour or so we have nowhere else to be except here, where we can be warmed in the sun, be cooled by the wind and rain, get some exercise or just relax.

It is easy to strike up conversation with a stranger at the dog park, much like at the school gate. Asking obvious questions like which one is yours? What’s her name? How old is she? After time I come to know the humans as Pearl’s mum, or Jack’s dad, sometimes I even learn the human’s names. The environment here helps conversation – we can talk sitting in the grass beside each other, with one eye on the dogs, or strolling side by side. There is something about not having to maintain eye contact that can be freeing. We can also make an easy exit when we have had enough or are uncomfortable, by feigning a doggie intervention or simply stating “it’s time for us to go now”.

In this environment I regularly see people I don’t see outside of the park, and because of the frequency of our meet ups, relationships develop and a community builds. The professional dog walking humans arrive every day at 10am with one to six dogs each; so, others come at that time too, as there is nothing quite so sad as a dog arriving at the park to find there is no-one to play with.

Over time the relationships with the humans deepen. We learned that Steven got his doggy companion Rufus when he decided to break his gang ties and give up drinking and fighting. He was tired of his old patterns, and depressed. Rufus gave him a reason to get up in the morning and to go out into the world. Rufus helped Steven grow. When I first joined Steven on a bench to say hi and ask the obvious questions he would not look me in the eye, and if a male joined us, Steven would respond to the male, even if I asked the question. Over time this changed and strolling over the hill together one day we spoke about his past, his family, his time in prison, and his decision to make changes in his life. It was flattering to have Steven tell me his story and hear about his hopes for a better future.

The only hitch was that Steven’s partner would not allow Rufus inside their home – he was kenneled all day and not a happy dog except when at the park. Steven decided for Rufus’s own good he had to be rehomed, (some of us muttered between ourselves about rehoming the partner and letting Rufus inside, as we knew Rufus had been so key to Steven’s life changes). I have not seen Steven again, but I do know Rufus is now with a kind family with three teenaged boys and another dog, he is a house dog, sleeps with his human brothers and continues to bring love and joy to his human companions.

I’m glad I approached Steven, and I’m glad I asked some less obvious questions and listened to learn. I’m also glad that Rufus was there when Steven needed him most, and that Steven recognized when it was time to let Rufus go.

We know Grant well; he is a large jolly fellow with a bounding Great Dane-Labrador cross called Billy. Grant calls me the bag lady of the park and asks me where I have parked my shopping trolley – (apparently I’m one of the worst-dressed of the dressed down). He updated us frequently on his miserable work situation, his partners teenagers who moved out and refuse to see her, and in time alluded to his growing depression. It was sad to see a funny, likeable man struggling with so much.

He told me one day he had been to a local support group for men and came away realizing his issues rated a one on a scale of 1 -10, ten being bad. This seemed to hearten him and give him perspective. Next he got a new job closer to home job with loads of human contact that he thrives on. Then Grant got throat cancer. Nothing serious he told us, just need some radiotherapy. The few times we saw Grant in recent months he was a shadow of his former self, and Billy was getting larger because he was getting out less.

I saw Grant at the park this morning, he is back at work, looking well and the cancer is gone. Listening to learn – about Grant, his worries, his humour and hopes was a gift. It was also an opportunity to practice asking some of those different questions such as what’s hardest about that? How do you know that is true? Questions that dive deep and take us past the chit chat.

Sally has a colourful past and is honest as they come. She and her two dogs Roxy and Billie were frequent park fliers. Sally has from the get-go let us know that she is in recovery and battling several issues including constant pain from a work injury and is currently unable to work. And boy is she doing everything to climb out of this space.

After several months her openness led to her, me and another woman Penny, (her doggie companion is Charlotte, a loving and smart cattle dog rescued from an awful situation), huddled for over an hour sharing our shadows, journeys to a better place, comparing medications and wellness tips.

What struck me about this is that when one person is vulnerable and speaks out it quickly builds trust. (Yes, Brené Brown is right). We bought our whole selves to that conversation, protective shells off, soft inners exposed – we chose to be vulnerable. I felt like these women had my back, and I had theirs. I was more open with them than I have been with some close friends and family.

When we choose to let our own barriers down – using judgement – it is amazing how often we discover that people we assumed had it all sorted have their own challenges and fears. It connects us so much more to the humanity of a person, and in my experience buoys my spirit, and so far has never left me feeling “less than”.

Sadly, after a long and happy life Roxy recently passed away. Sally is managing well but Billie is struggling a little. Sally has had surgery for her pain and looking forward to rejoining the workforce.