Give him enough rope 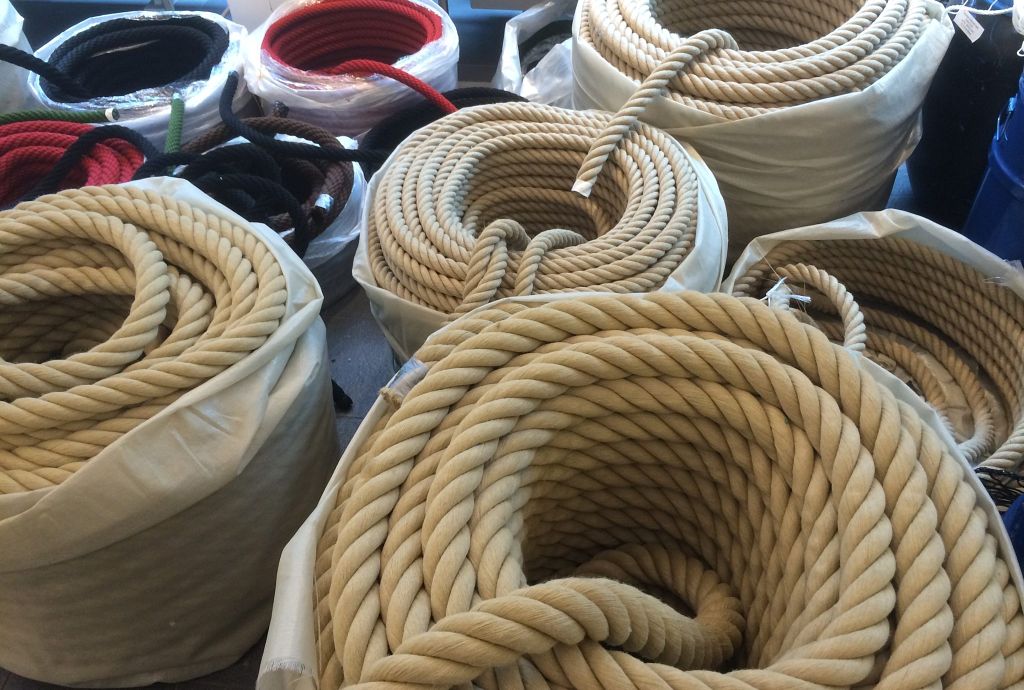 I took this picture in a rope shop in Hamburg a few weeks ago.  Hamburg’s long history as a trading port seems bound up in these sacks of hawsers, sheets, lanyards, painters, or a rope by any other name.

This picture also came to mind in a completely different context: the latest round of gobsmacking events in the US presidential campaign – more unprecedented precedents, depths previously unplumbed, madnesses Trumped by greater madnesses.

Give him enough rope… I thought, and the rope shop came to mind.

When they find themselves in a deep hole, some people just keep digging…  and I imagined Trump shovelling down into the sacks.

When I wondered if this craziness were deepening and solidifying Trump’s basin of attraction those basins became the coils of rope in my mind.

I visualised the ‘attractor landscape’ with imaginary blocs of voters tipping from one sack to another.

(The attractor references are complexity jargon; I will explain them as I go along.)

Trump has got into a big hole with his recorded comments about being able to force himself onto women at will. He half apologised then he kept digging.  His surrogates who have been speaking for him have kept digging with him.  Give them enough rope?  They have passed off Trumps remarks as “just locker room banter”.  During the second Presidential debate Trump denied he had ever acted in this way.  Many women have now come forward saying: ‘Yes, you did!’  Trump’s response has been, ‘No I did not!’ even though they confirmed his initial bragging about groping and grabbing first and perhaps asking questions later.  But then Trump, because he cannot seem to control his mouth (and other parts of his anatomy?), bolstered his categorical denials by pointing to the looks of women involved and asking, ‘would I come on to her?’ This is the non-defence of, ‘I may be a predatory lech but only the best prey will do.’

I have been wondering what all this does to the feminist cause.  Is it possible that Donald Trump is providing an accidental and belated push for feminism?  And what does the theory of attractors, basins of attraction, and landscapes of attraction have to offer about the dynamics of this situation?

Complexity theory uses a metaphor called basins of attraction.  The image is of a ball in a basin, rolling about until it gradual settles toward the bottom.  Gravity or magnetism pulls the ball to the bottom of the basin and as it spins around the basin slowly getting lower the ball follows a pattern.  We tend to be pulled into basins.  If we go to a funeral we generally dress and behave very differently from how we behave if we go to watch a football match or go to a wedding.  Each wedding, funeral, and football game might be different and we cannot exactly predict what will happen but there are patterns and we are pulled into behaving according to those patterns.  The patterns arise not because of any one thing but because of the way many things fit together and the extent to which those things are coherent. The more coherent and self-organising, the stronger the basin.

Attractors and basins of attraction describe coherent patterns that hold things the way they are such as the culture of an organisation or the ways resources are allocated.  These can be added together into an attractor landscape.  A number of basins put together into a pattern of the organising ridges and hollows of organisation or a community.

A community might be in a basin of harmony, with multiple economic and social factors supporting its well-being, but it could tip into a basin of degradation with the closure of the major employer in town.  People might move away, become dependent on welfare, lose morale, become more divided among themselves.  Or the arrival of a religious school and community could become an attractor for a very different kind of community creating a different basin of attraction.

In the presidential campaign both the Democrat and Republican campaigns are built around core coalitions of support – their respective bases – and these can be seen as basins of attraction.  Each campaign involves a balance between motivating as many as possible of the base to get out and vote and then drawing the support of as many of the independent or undecided voters as possible as well as perhaps also shifting wavering supporters of the opposition campaign to either come over into your candidate’s basin or to at least be pulled out of your opponent’s basin into a non-voting hollow.  This of course creates a tension for candidates where they have to be radical enough to excite the passions of their base and also sound moderate enough to attract support in the middle.

US politics has increasingly been drawn into two polarised basins over the past half a century or more.  The middle ground that allowed coalitions to be built on particular issues in the 1960s and 70s has largely gone to be replaced by two much deeper attractor basins.  The gridlock in Congress is a result of this.  Multiple factors have been at play: people tend to live in more homogenous communities, electorates have been redistricted to reflect this and to increase the number of safe seats, it has become harder to win selection as a party candidate than to win election against the opposition and so the political base has become more important than winning the middle ground, fewer people are involved in politics and so the base can be more narrow and extreme, and people can choose their news media to reinforce their realities on a daily basis.  Ironically, in a world of greater education and access to information, the attractor basins have become narrower and more strongly self-reinforcing.

Oddly Trump may be reshaping basins, or at least denting them.  As his campaign has got into difficulties he has talked of taking off the shackles and campaigning how he wants.  Members of his base love it.  They are solid behind Trump and happily reinforcing themselves in their own basin of detraction[1].  While they are a large and boisterous community, they are also too small a group to win on their own and the more Trump is unshackled the less likely others will be drawn to support his campaign.

By deepening his own basin of attraction Trump seems to be doing significant damage to the larger Republican basin, perhaps fracturing it into an attractor landscape all of its own, pulling apart the evangelicals from the white men without a college education from the wealthy economic liberals from the Mormons, etc, etc.

Across the political divide, the threat of Trump is tending to unify the different basins that make up the larger Democrat basin: African-American, college-educated, women, Hispanic, younger Sanders supporters.  In this election cycle the Republicans had expected that they would unify their side in support of anyone-but-Clinton.  But when the Republicans ended up selecting the most unpopular candidate in US history, to run against the second-most unpopular, they seem to have reversed the effect.

Trump has been most appallingly toxic in his recent remarks about women.  Here also, beyond partisan politics, we might see a tipping from one attractor basin to another.  Trump may have succeeded in reminding many people of how far we still need to go in achieving true equality for women and how much latent, and active, misogyny exists waiting to be stirred with the coming to power of the first woman president.

In intractable conflicts, the deepening of one attractor basin, the reinforcing of prejudice against women in one group, for example, leads to a strengthening of others in the group appalled by that prejudice and it also leads to movement in the middle of the issue where people have not taken these concerns particularly seriously. Men and women who have believed in equality for women and for their daughters and granddaughters, but who are unlikely to call themselves feminists or to have thought a lot of attention needs to be paid to the issues, have been shocked by Trump and his colleagues into seeing that there is a lot more to do.

The point about intractable conflicts where each basin of attraction is reinforced by the actions of ‘the other,’ is that standard attempts to mediate the conflict and for help one group to ‘understand’ the other often just leaves each being more convinced of their own rightness[2].

Changes in intractable conflicts are non-linear.  It is usually a mix of changes over time and shocks to the system.

Feminism and the advance of equal rights and opportunities for women may be a struggle toward an inevitable outcome, at times, slow or stuck, at other times leaping forward, often tortuous and painful, sometimes with backwards steps.  It may be that the anti-women or anti-equality basin of attraction is just going to take a long time to fully erode.  We may see small signs of progress even on the harassment issue.  As an example, my hunch is that the women who have come forward to say they were harassed by Trump have had a much more open hearing than Anita Hill had for her evidence against Clarence Thomas or women who complained about Bill Clinton 25 years ago.

But perhaps Trump and the outrage he creates may be a shock to this system[3].

Part of Trump’s appeal to his supporters has been that he will shock existing political system.   But this might be playing out in opposite ways to what he might have expected.  Trumps shocks may instead advance the cause of equality for women and increase the fragility of the Republican party.  More rope?

[2] Peter Coleman studies intractable conflicts and applies complexity theory to think about them in new ways.  He has written a great book on this called: The Five Percent: Finding solutions to seemingly impossible conflicts.

[3] Coleman cites research suggesting the importance of shocks in breaking up attractor basins, that most intractable conflicts followed on from major political shocks and were also resolved after major shocks to the system.