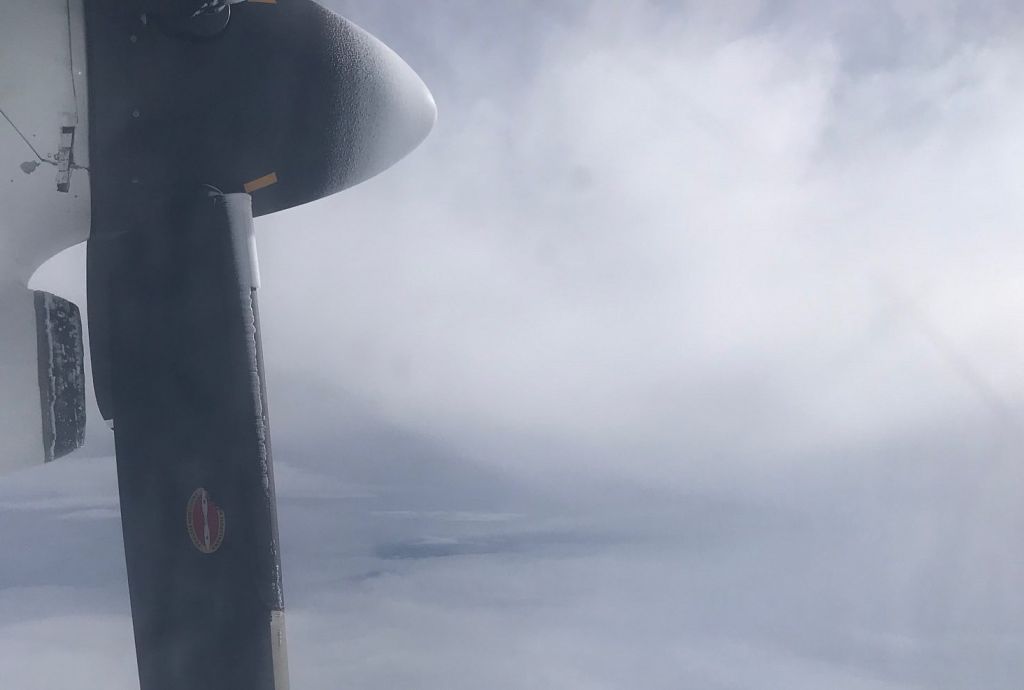 I was writing a blog when it happened.  Now that blog, on Trump, racism, and the shape of intractable conflicts, will have to wait.

I was flying to the small New Zealand city of Tauranga in seat 4A on NZ8260 in a Bombardier Q300, a 50 seat turbo-prop aircraft.  We were about half an hour into the flight when there was a loud bang from the port engine.  That was quickly followed by a rhythmic clunkety, clunk, clunk from the propeller just outside my window.  Not a reassuring rhythm.

Then the pilot shut the engine down.  There is something surreal watching a propellor come to a stop outside your window at about 16,000 feet. I watched transfixed as it rotated idly in the passing breeze.  Was the ice on each propellor blade reducing or increasing?  Swish, swish, swish.

Today’s edition of the local Bay of Plenty Times has a banner headline: TERRIFYING FLIGHT.

It describes a loud bang, smoke, a long flight on one engine and the fear of passengers.  Really?  I was not terrified.  Trish, my wife, who was in 4B, did not report terror or appear terrified.  Which is not to say that other people were not at least very scared.

This got me wondering if I were in the middle of one of Lisa Feldman Barrett’s experiments.  In her 2017 book How Emotions Are Made she argues that we have basic feelings  — such as “pleasant” or “unpleasant”— and sensations in our bodies.  Beyond that, we construct our emotions.  These feelings and bodily sensations are contextual, sometimes triggered by the environment – like a plane flying on one engine, and then we interpret and label them according to what we have learnt growing up or from the world around us.

Take schadenfreude, for example.  There might be someone out there whom I have frustrated or offended and they might be thinking: “Ha, ha, ha!  That turkey Keith Johnston was on a scary flight.  Serves him right!”  Schadenfreude is pleasure at someone else’s misfortune.  Feldman Barrett uses it as an example of how emotions get made. You do not need to know about schadenfreude to feel this pleasure but if you do know about the concept and the word then the emotion “gets triggered more easily and you can feel it more easily.”

This time I did not feel much fear.  That might partly have been the effect of Trish and I holding hands.  The neuroscience suggests that is almost always calming.  It also might be the things I have grown up with.  I knew there was redundancy in the system and that the plane was designed to be able to fly on one engine.  I knew pilots were trained to deal with this situation, despite it being a rarity in reality.  My dad was an aircraft engineer.  My older brother spent more than 40 years as an air force pilot and then flying large commercial airliners.  He explained to us after we landed, by the way, that it was a bit easier to fly the plane with the port side engine shut down than losing starboard engine.  I think I followed the logic, but not well enough to explain it here.

The point is that my background prepared me for one set of emotions; others were more prepped for fright. Our histories shape the emotions we construct even in the same circumstances.

We landed gently in heavy rain to a full turnout of fire engines and ambulances, their lights flashing through the sparkling of raindrops.  The passengers cheered.  Only when a young woman from the back of the plane needed to get off as fast as possible and then I saw her sobbing in a friend’s arms when we got to the terminal did I feel moved by the distress of others.  There was fright and deep relief from some of the passengers in the terminal and a little later during a thorough, and impressive, debrief that was held with the crew and airline representatives after we had landed.

I am not saying my response was right or better.  Just that we are all different.  We make different sense and construct different emotions from the same presenting circumstances.

One thought on “Fright or flight”