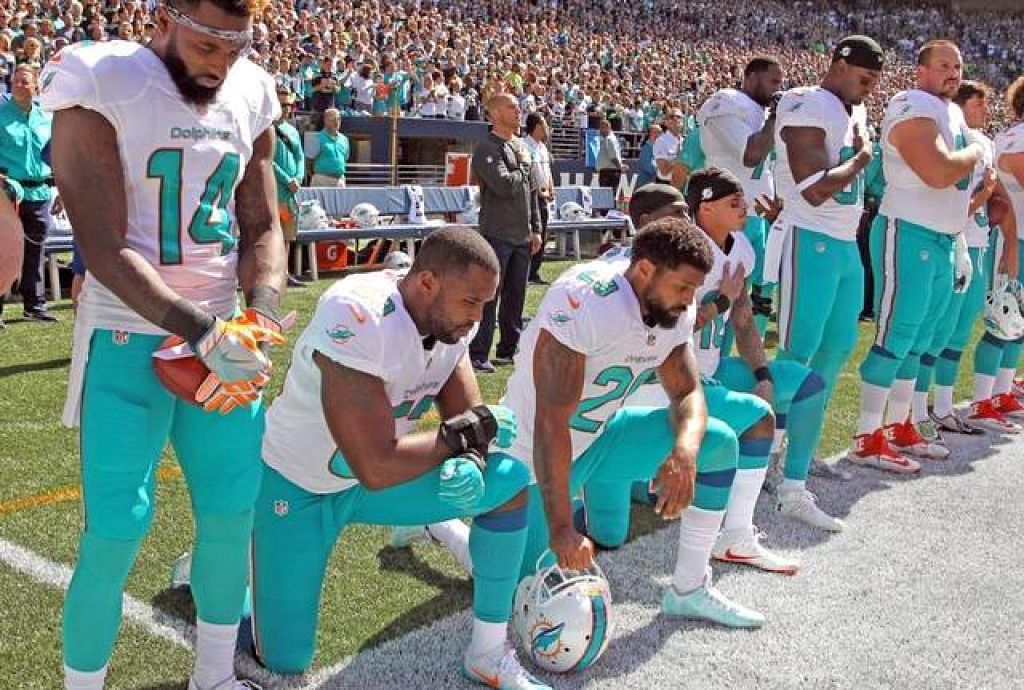 Paradoxically, in kneeling Colin Kaepernick was heightening matters.  On his knees he was taking a stand.  And in the midst of a number of such paradoxes I have been wondering about some of the ways we teach and use complexity theory.

Enough of the riddles.  Let me explain.  Throughout September into October, more and more US sports people have chosen to kneel when the national anthem is being played at the beginning of professional football, basketball, and soccer games.  These actions have grown from an incident on August 26 involving San Francisco 49ers quarterback Colin Kaepernick.  It was noticed that he was staying in his seat while the anthem was being played before an early season game when the other players and spectators were standing, many with their hands over their hearts.

Now Kaepernick kneels through the playing of the anthem.  He and other sportspeople involved are protesting in support of the Black Lives Matter campaign and seeking to draw attention to injustices to African Americans and particularly the number of African Americans being shot in confrontations with police officers.  There is data to support their actions. Studies show African-Americans are 30% more likely than whites to be pulled over by police, as well as three times more like to be searched, twice as likely to be arrested and twice as likely to be shot by a law enforcement officer

Kaepernick’s action set off a storm of debate.  Much of it vitriolic and abusive.  He was accused of disrespect for the anthem, for the US of A, for people who have served and died or been injured in the military, for questioning and disrespecting the police.  Commentators on social media questioned whether he should be on the team, or whether as a professional football player he is too rich to take a position on injustices, or whether sports people under contract should be allowed to make such gestures, or whether people who play for the NFL forgo their rights to freedom of speech because they are role models.

When football players from the Miami Dolphins knelt through the anthem at a recent game, Miami police union president Jeff Bell said: “I fully support the Dolphins expressing their beliefs. The only thing we’re saying is there’s a better venue for this than during the national anthem while the TV cameras are on them.”

A similar tone was struck by officials of East Carolina University when 19 members of their marching band knelt during the playing of the anthem before an ECU Pirates football game. “College is about learning,” wrote the school officials, “and it is our expectation that the members of the Marching Pirates will learn from this experience and fulfill their responsibilities. While we affirm the right of all our students to express their opinions, protests of this nature by the Marching Pirates will not be tolerated moving forward.”

There is clearly a difference between “Strike up the Band’ and striking the band. College is about learning, as in, learning the rules!  And, what might the point of protesting be without having TV cameras present?  If a tree falls in the forest…..

What has all this got to do with complexity theories and the leadership practices we teach?

We talk about attractors as elements occurring in complex adaptive systems which act much like magnets.  They attract other parts of the system and cause the system to act in particular ways.  As an example, the ways decisions get made in different organizations might be attractors.  It might be there is a practice that groups are always involved in hiring decisions; or that the organization has an autocratic leader and most decisions need to be run past him; or the leader has delegated day-to-day decisionmaking and she only wants to be pulled in for high risk or crisis decisions or the longer-term strategic work she does with the board.  Each of these different approaches could function as attractors.  They could create and hold patterns of behavior in their different organisations.  What happens with a specific decision might be unpredictable but a general pattern could still be seen operating in the system and when different things happen (that might challenge the basic pattern) the system would often be drawn back into a familiar ways of doing things.

Kaepernick’s action broke a pattern.  The national anthem is an attractor at the beginning of many high profile sports events.  Standing and singing the anthem together is usually a chance for the whole crowd to rise above the my-tribe-versus-your-tribe dynamic and feel joined in a common bond.

By some sports people kneeling or sitting through the anthem another question is raised. Is this anthem serving the whole nation?  Is it serving our community?  Are some people so disadvantaged that they fall outside the bonds of togetherness? The protest uses the energy of the basin of attraction – the emotions of the crowd in the stadium and watching on television and the feelings of a common bond – and turns that energy into a different question.

Tactically this is a standard protest model.  It is heightening the contradictions.   The anthem professes unity, hope, a better life, common bonds but there is a contradiction between this and the lived realities for many African Americans.  The protest takes the common hopes expressed in the anthem and converts them into a question about this contradiction.  The action takes its power from the power of the attractor that is the singing of the anthem.  In a way what the Miami police union president and the ECU officials were asking was: I get there might be contradictions but can’t you protest them in private?  Can’t you not heighten them?  Can you leave our basin of attraction untrammelled?

This argument about the right time and place for a protest also has a long history.  When Martin Luther King was sitting in a Birmingham gaol cell in 1963 after being arrested at a peaceful civil rights protest he was moved to respond to the white clergymen who had published an open letter in the local newspaper.  While agreeing that social injustices existed in Birmingham, the clergymen argued that outsiders like King should not get involved in local matters; and they deplored the civil disobedience of the protestors, claiming that African-Americans should be patient and make their case for justice through “the proper channels”.

In response, King wrote: “For years now I have heard the word ‘Wait!’ This ‘Wait’ has almost always meant ‘Never.’ … Justice too long delayed is justice denied.”

When we teach about safe-to-fail experimenting as a way to respond in the face of complexity, we advise leaders to experiment at the edges of issues. This is a challenging notion for leaders who have been trained to zero in on the center of the problem: to analyze the root causes of issues and look for the leverage points that will make the biggest difference. In complexity, of course, we do not know the relationship between cause and effect and we cannot know the right answer.  This means root causes and critical leverage points are also harder to define.  Starting at what feels like the nub of the issue usually also means taking on the most entrenched interests and where the greatest efforts have already been made.  Where the attractors in the system push back and the patterns stay the same.

To what extent was Kaepernick starting at an edge or in the middle of the issue? It looks edgy and brave.  He might have assumed abuse would be piled onto him.  It could have been a career-limiting move.  It could be seen as an experiment: others might pick it up, or not.  And it was using a highly symbolic act, the singing of the national anthem, and then converting the energy invested in those symbols for the cause of justice.  It is an example of going to the heart of the attractor basin in a high energy environment and seeing if a small nudge to the system might convert some of that energy into a larger movement.

Contrast this with what happens when we are pushing hard to make a desired change and then our own “immunities to change” push back and leave us much where we started.  Here the aim is to use the energy in the attractor (singing the national anthem) to enhance the visibility of the campaign for justice and to heighten the existing contradictions.  As we encourage leaders to try out small experiments and nudges might we also encourage them to look at where the attractor energy might be in the system and whether there might be ways to convert some of that energy to enable more good things to happen.