Every candidate a mirror? 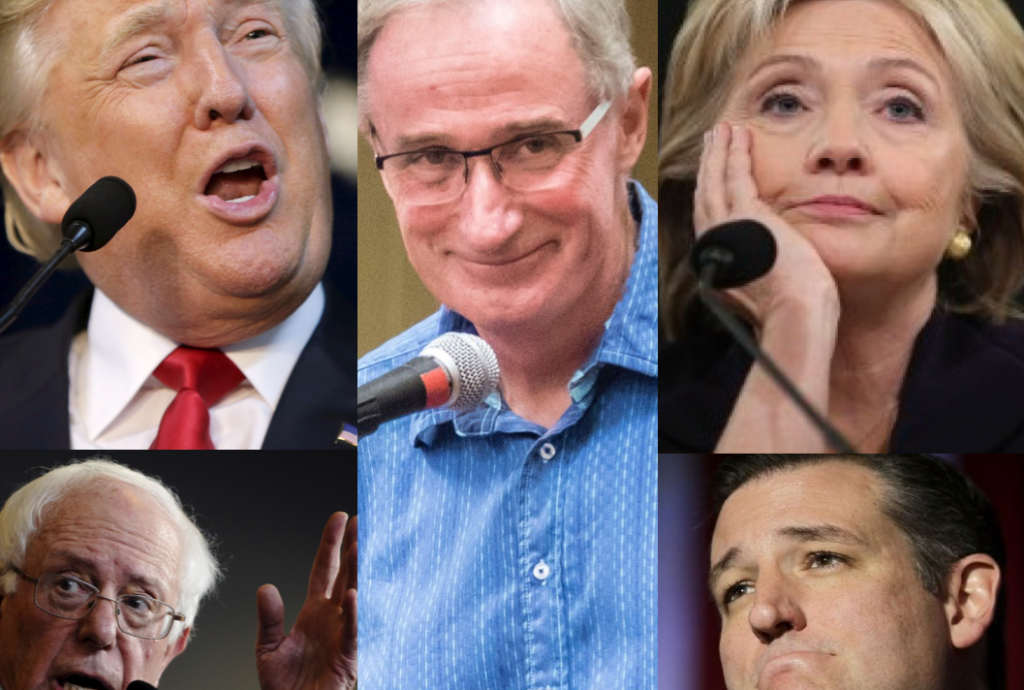 The US presidential election process feels like a gruesome reality TV show (funny that) where we are appalled but cannot look away.  What level of new debasement is just around the corner?  I have this total fascination with it and feel I have my head in my hands and am peering at it through gaps in my fingers.

I watch this from the southern end of the planet and I try to watch with just amazement and not judgement.  We all have a stake in how this plays out.  But maybe there is also a way that we are also a part of the play in this un-reality show.

I have been thinking about the main presidential candidates and wondering how I see something of myself in each of them.  Narcissism is an occupational hazard of presidential politics: so why not make the current contenders be a mirror for myself?  Or a mirror for ourselves?  Each of the main candidates is unique and distinct, but taken together I think they say something to each of us about who we are and how we look for what we love and loathe about ourselves in these brave people.

I say ‘brave’ people advisedly.  What a courageous (and/or foolhardy) act it is to run for any public office.  How exposing it is.  Interestingly, we generally do not want our politicians to be vulnerable and we crucify them for signs of weakness, and yet what an act of colossal bravery (and chutzpah?) it is to go public in this way.

If you were not sure about politics requiring you to give things up, note this recent comment by Donald Trump to CNN’s Wolf Blitzer: “I’ve given up a tremendous amount to run for president…. I gave up two more seasons of Celebrity Apprentice.”  We all have to make sacrifices.

So where do I (and Everywoman and Everyman) show up in this race?

Donald Trump offers authentic unpredictability.  I have been puzzled that so many Trump supporters say they support him because “he tells it like it is!”  Really?  He tells it like it occurs to him in the moment.  Or he speaks to our worst prejudices and fears and then steps away from what he has just said.  With verve, and often with heaps of imagination, he makes things up.  He values unpredictability.  Philosopher Michael Lynch has made the point that some of Trump’s strength with his supporters comes from him not seeming to care what the ‘elites’ think and his inconsistent statements are an example of him not having to care.

I get the attraction in being all over the place and also the power in not having to care.  There is a part of me that does not want to have to be consistent time after time.  As we use Kegan and Lahey’s Immunity to Change in our work we often point out how leaders who say they are committed to one thing but turn out to have competing commitments are dismissed for not walking the talk.  Instead, we call them human.  Do I want this in the president of the world’s most powerful nation? Up to a point I would welcome a mature vulnerability.  But having a president who feels that literally making it up as he goes along is a sign of strength is plain dangerous.

Bernie Sanders offers me another part of myself.  For years I have been an activist and have wanted to reduce the world to a simple message of right and wrong and to take up my sword and shield and beard the lions in their dens.  Isn’t it great when we can feel the simple clarity of righteous indignation?

While on the topic of righteousness: Ted Cruz offered the most disciplined and doggedly determined efforts to carve out the space of righteousness and wrath, only to then see people who ostensibly shared his conservative evangelical views slipping away and voting for The Donald – Lucifer Incarnate!  Trump kept calling him Lying Ted but I identified with Crying Ted because he seemed to grimacing through the bottled up despair and frustration that I too have felt some times when I have embraced the right cause only to find those I have been seeking to work alongside have not been as staunch as I have assumed they would be.  I have been left holding the placard or stuffing the envelopes (in a pre-electronic era).  And there have also been occasions when I have been the one accused of selling out.

Then there is Hillary.  She has by far the most experience and takes the largest view.  She is a policy wonk.  I can geek out on the details of all her positions.  And, like the policy wonk I have been in my own small world, I can imagine her trimming and clipping and trying to fit all the policies in the trunk of a very small car.  They all need to go together consistently, workably, and tidily and a vast array of interests (rich and poor) need to be taken care of in the process.  But amid all the packing and unpacking of the car, how does she have time to capture our hearts?

Will the dude with the remarkable windproof hair, and only rarely with his hand on the wheel, cruise around the block again in his Thunderbird and turn enough people’s heads and hearts?  Is that brio a part of us, too?

But just because I can see a part of myself in them is not a reason for people to vote for them.  It makes them human, rather than presidential.  As Groucho Marx said: “I refuse to join any club that would have me as a member.”  Alas, there are very few on the current list of contenders that strike me as “presidential.”  Fortunately, there only needs to be one.