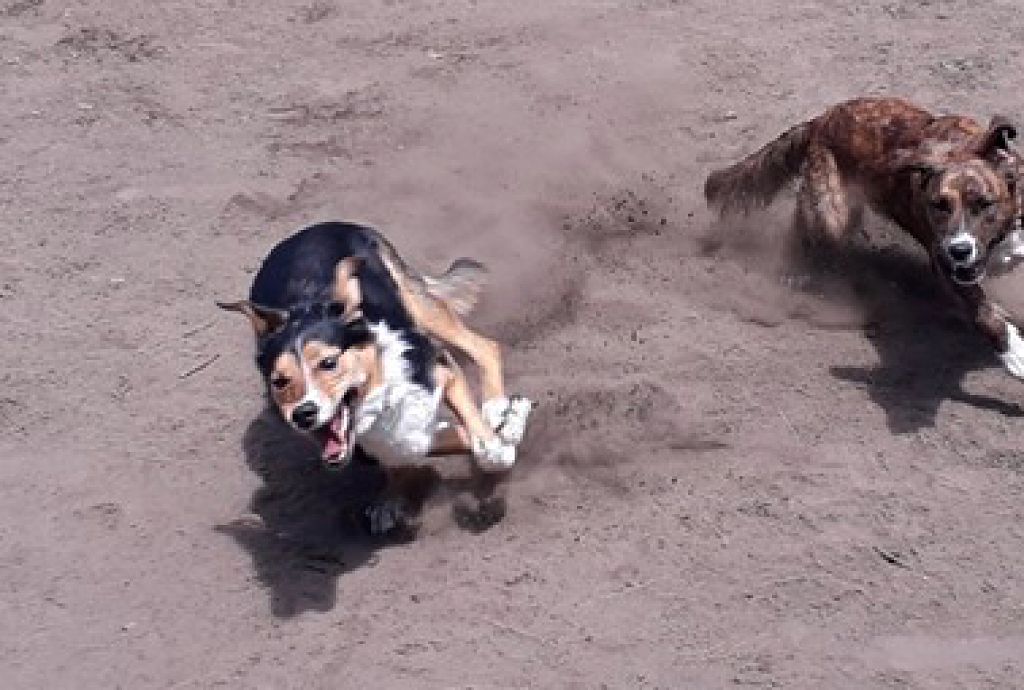 Over the past 18-months since my partner started a dog walking business I have spent a lot of time at the dog park. My time there has taught me many lessons, here are a few I’d like to share.

Dogs are not racist, sexist or any other of the “ists”. Dogs will play with other dogs of any colour, gender, size, age, shape, ability or quirk. The goal is to make new friends and have fun. There is a place for everyone, and roles are based on ability and preference. The fast dogs lead the chase – we cheer when the whippets Otis and Diesel, arrive – now we are in for a fabulous display of chase. Hole digging is a team activity, the long haired Shar pei Siri’s role is site manager, she cheers the diggers on and whips then in to shape when they slack off. Dogs share the load taking turns as the digger and rester, and soon learn the worst place to stand is behind the digger if you don’t want a face-full of dirt.

If a dog accidentally hurts another dog in rough play, a quick chin lick for the hurt dog is a sincere apology – accepted with graciousness before play continues. Occasionally there is a rumble as dogs seek to find their position in the park pack. If annoying humans don’t step in the rumble will end with both dogs having reached an understanding. No doggie grudges are held, no gossip sessions or back stabbing, just resolution and moving on to what is next.

Dogs exhibit compassion. When puppies arrive and the dogs greet them there is a clear gentleness in their approach – they know the new arrival is young and inexperienced and their play is gentle. Old dogs are acknowledged too – respectfully greeted in a gentle way and not expected to join in the rough and tumble. If a dog racing with joy down a hill, head turned to see who is following, knocks over a human, it will stop and check in with the human to make sure all is well.

Living in the NOW

There is only the present for dogs at play – the sheer joy, the actual smiles on their faces as they play chase, dig holes, wrestle with their friends and receive love from the humans is beautiful to see. They have an appreciation of the moment, not dwelling on what happened yesterday or what is coming up tomorrow.

There is also the opportunity to be on the balcony and see simple patterns at play, and it is a lovely analogy to looking for patterns in any system. Here are a few I have noticed:

Whenever the enormous Rottweiler Zeus arrives we all notice – there is a collective whisper, from dogs and humans alike of “Zeus has arrived”, he is welcomed with awe by the other dogs, with smiles from the humans that know him, and with worried looks from the humans meeting him for the first time. He struts in, swaggering from side to side, knowing he is top dog, and yet he has little interest in other dogs. His goal is to visit the humans one by one, sit on their feet, jaw oozing drool as you are allowed to pat him. He spends a minute with each person before sauntering off to do his own thing. What happens when individuals on your dance floor arrive or leave?

Some dogs see a friend arrive at the gate – they crouch in the short grass – still as stone, anticipation growing as their friend approaches. The friend pretends not to see them, getting closer and closer, looking around to see who is here today, ignoring the stalker in the grass. Then from 6 feet away the crouched dog pounces – surprise I gotcha – and playful hell breaks loose. How does the arrival of team member X impact on team member Y or Z?

There are some fair-weather dog walkers, and the rest of us who turn up rain or shine. The pattern here is clear, we huddle grumbling and cold under the “big tree” while the dogs revel in the weather – rain is just another word for fun, especially if there are puddles for Fudge the spaniel to roll in and for Lucy the (what is she – part spaniel, parts of 5 other breeds) to lie belly flat in, to cool off from leading the sprint. Meanwhile Mr. Higgins the Huskie lies in the rain enjoying the cool weather after a summer of heat he does not enjoy. How do people on your dance floor respond to changing conditions?

My partner John decides it is time for a circuit of the park – he whispers to Siri “up the hill” and they walk off together, John claps his hands and half of the dogs, and many of the humans, follow. Siri and Mr. Higgins (a dog) rough and tumble all the way up the hill – Myles (all smiles) lunges ahead, four laps for each of our one, the big old fellas Bede and Cody (both part mastiff part lab) Cody wearing his muzzle – a never ending sentence from an incident 10 of his 12 years ago – ramble behind – they wander down paths and get lost and we wave our arms wildly and call loudly so their fading eyes and dimmed hearing bring them back to the pack. When the dance music changes who does what – who races to centre stage, who gets left behind, who looks out for others?

Overwhelmingly the lesson I have learned is that humans domesticated dogs, they are (wo)mans’ best friend, and they genuinely love us – but nothingbeats being with their own kind in an environment where they can do what dogs do. And I think many of the humans at the park would agree that perhaps we like dogs better than humans – there is something about their wisdom, compassion, transparency and unconditional love that makes them so easy to be with.

And what about the lesson’s dogs learn from us? That some humans are cruel, or frightened or panic. We have seen dogs kicked and struck with leads, both in the name of protecting or disciplining their dog. I hope the dogs I know learn that most humans are kind and welcome them with hugs and pats; and that if we see them being mistreated we will do something about it.

Dogs are gentle inspiration for many good lessons we can learn, should we care to notice.

Photo from the Great Doggie Escape: Misty and Lucy having dog fun