Blessings and privileges of connection 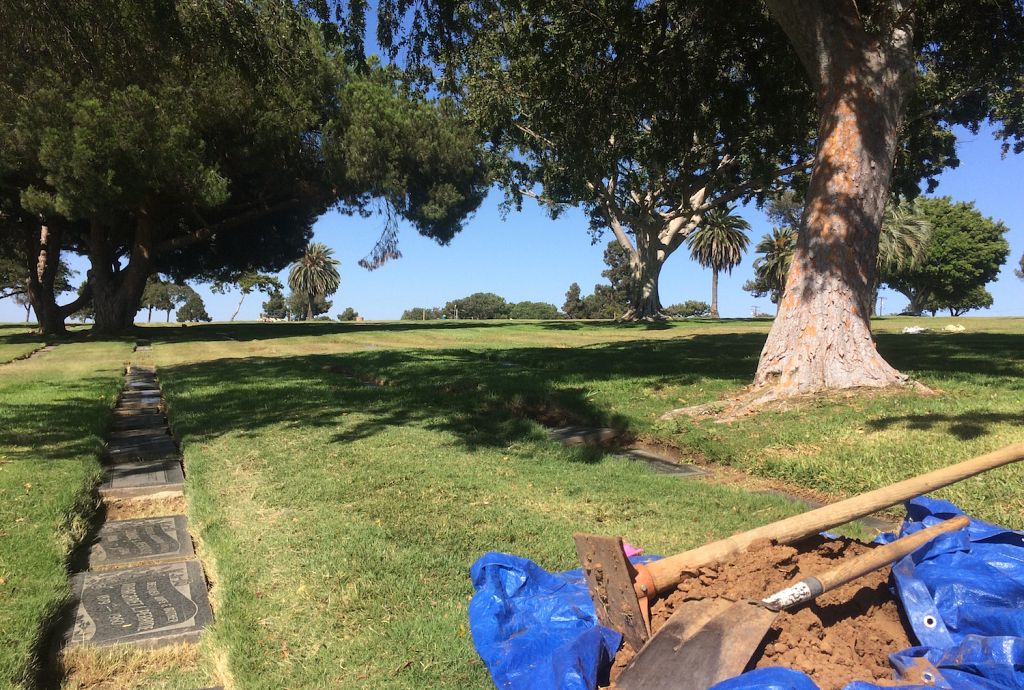 Jimmy, my brother-in-law, died last week and today Trish, my wife, and I took the urn with his ashes to a cemetery in Los Angeles and interred it in the grave of his mother, where she was buried more than 50 years ago.

We had visited Jimmy a month ago. That visit and Jimmy’s subsequent dying stirred up many things for me particularly about connections and about privilege.

Jim led a hard, hard life and, in my experience, he faced his hardships with great dignity and forbearance. His father died before Jim was born and Jim arrived with what was called cerebral palsy at the time. Growing up he spent some time being boarded at special schools. His mother died when he was in his late teens and things blew up with his stepfather who quickly moved him out. Eventually Jimmy ended up living on the streets in LA and then some years later in a farm refuge in the hills north of San Diego.

From there about 30 years ago he moved into a one-room apartment connected with a church in a nearby town. He helped out around the church and sometimes went to junior college (his essays were well researched and argued). He sang in the choir and was a member of the vestry representing the homeless in the community. He was, by many accounts, a loved and valued member of the church community.

A decade ago, after a stroke, he went blind. People rallied around. Then a succession of splits occurred in his church. Jimmy was cared for by a part of the community committed to looking after others. Alas they were in the minority. He suffered another stroke; his condition worsened. He was eventually evicted from his apartment. Many of those who had cared for him had moved on or suffered their own worsening health. A few years ago a couple of his very dear friends gave him sanctuary. They built a replica of his little apartment in front of their house so he could find his way around. He brought his cat with him. They have cared for Jim through his declining years.

Asked about each of these different events in his life and how he coped with them, Jim would reply that he “accommodated”. He made do. He was independent and as self-contained as he could be in the circumstances. He had been very afraid of his stepfather and his mother’s decline had been distressing to him. It was very hard for him to trust others. But he made the best of things. He got by and rarely complained. Sometimes as Jim talked I thought he was channelling my mother, but they had never met.

Many different elements contributed to the dire straits he found himself in. I will focus here mainly on the rending of his community.

After being with Jim a month ago I had a week of meetings in San Diego first with our Cultivating Leadership colleagues and then with members of the Growth Edge Network (a vibrant group of practitioners and researchers using and exploring the ideas of adult development). The people in these groups are a delight: warm, smart, engaged, loving. They work for and with others to help people achieve their full potential. I feel very close to many of them and it has been a privilege to have played a part in helping to form these groups and a delight to work and to learn with the people involved.

It is also true that I found it very jarring to go from the harsh realities Jim’s world and his decline to the warmth of the Cultivating Leadership/Growth Edge communities. Much as I love my work world, I was struck by how much we in our community are a group of very privileged people. We are generally comfortably off, and generally come from majority cultures with all the power that implies. We often have great clients doing really interesting work and themselves also being privileged, and even sometimes entitled.

In our work we get to associate with people of privilege at their growing edge. They may have demons and they also have agency. I am very grateful for this and I also wonder about the ways it causes me to lose touch with other tougher places. Is there a sense of disconnection that is the shadow side of our sense of connection? Does the specialness of our adult development community, and our ways of understanding how different people make sense of their worlds differently, also at times narrow our world?

In asking this, I do not wish to diminish us as people or a community or our own realities. Many of us have demons we have grappled with and still grapple with. We all suffer. Most of us are old enough to have many hard things happen in our lives: losses of loved ones old and young, losses of possibilities, losses of parts of our bodies, perhaps all of the above. We live with our fears. And we are also connected with each other and with our own families and networks. We tend to be able to see the hurts and the hopes in loss and the losses and fears in hope.

We face all this with comparatively greater choice than most others. Some of this is a function of our own development and what is object to us or what we are subject to. And some of it is a function of the trajectory of our lives and the resources we have and the supports that exist in our society.

When we fall through the cracks in our societies we generally have confidence that we will find our way back out. But Jim’s life often reminded me of how large the cracks can be, even in the richest country in the world, and how hard it can be to get back out of them. He had the misfortune to live on the edge in California where the safety nets we expect in rich societies are here full of holes. The assumption is that individuals will make it on their own, charity might provide, or you might find be lucky and get help from a state system that has been run down. In Jim’s life he was helped by good and caring people at times only then to fall back through the gaps in the community web: his church splitting, his health declining, and the health of his helpers being at risk.

Jim had a network but its links became thinner as he aged. When he died, the couple of angels who had cared for him told us that they “were not funeral people” and that the community Jim had been a part of had scattered. Trish and I took his ashes to the cemetery, and created a ceremony for Jim, on our own.

But even when we are feeling disconnected, connection emerges. Last night at dinner at the LAX Marriott Hotel, our friendly young African American server named Francis was asking about us and, when she heard we came from New Zealand, she asked, “What brings you to LA?” Trish said, “My brother has just died.” Francis expressed heartfelt condolences and took our order. When she came back with the check there was only a slip of paper in the billfold. Her handwritten message said, “I will be praying for you !!! Just know that God is in control… And your Brother is at Peace. (I covered your bill) Francis J”

Jim’s gift to me is that he reminds me of the many hard things he and many others have to accommodate to, the ways their choices have been limited, and how they have faced their lives with deep dignity. I am blessed by family and friends and a vibrant community. I have a wealth of choices and I am left feeling very grateful. Francis’s gift is a reminder of what love and kindness can create in the moment.

Thank you to both Jim and Francis.